Marjorie had been deteriorating for some time, really wasn’t well, and it seemed possible she might get worse. Don’t get the impression that we were the only people seeing her. Her daughter visited when she could, but had to shlep down from Ipswitch; a district nurse visited and a couple of neighbours occasionally checked up on her; carers went round regularly to do what could be done in their limited time (after dressing her ulcerated leg), and it was one of them who finally called the nurse. Such situations are terrible, but difficult to resolve when the patient is as headstrong an individual as Marjorie. She feared being hospitalized, being moved to an old people’s home, feared the interference of social services, and this was all because of her bigger fear of losing Max. Eventually she acceded to going into hospital, quite probably because she could not even get out of her chair to feed her dog.

The first we heard of this was when Caroline received a phone call from The Cinnamon Trust at lunch time. She took the afternoon off work and we hurried over to Burnham to find Marjorie’s house locked up (the key in one of those little coded safes beside the door). The moment he saw us Max began rushing about excitedly inside, but we couldn’t get in. We knocked at her neighbour’s house and were let in to find the district nurse there having a cup of tea. We hoped she could let us in because surely by now Max would be getting desperate. She couldn’t – she didn’t have the authority to do so – so gave Caroline the number of the social worker concerned with this case. Despite Caroline having been vetting by the Cinnamon Trust he also could not let us in and put us onto Marjorie’s daughter who, knowing we had been walking Max for some time and had not yet mugged Marjorie nor stolen the family silver, gave us the code to the key safe. 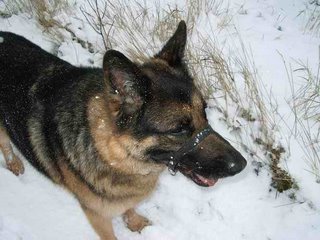 So eventually we got in to find Max’s pills out on a counter and a scrawled note of instructions beside them, we then took a frantic Alsatian for his much-appreciated walk and worked out together how we were going to look after him. Luckily, being self-employed, my time is pretty much my own. In the mornings, after dropping Caroline off at work, I drove over to Burnham, took Max for a walk, gave him his breakfast, gave him his epilepsy pills, then spent some time with him before coming back home. In the evening we both went over there and went through a similar routine. At the end of it we were reluctant to depart, because Max knew we were going, would butt his head against Caroline seeking affection, and wander about morosely. We stayed longer, trying to clean up the house a bit since, with the weather turning wetter and colder, Marjorie’s back garden had become a quagmire and Max tracked plenty of it back inside. But mainly we stayed just to keep the dog company. Even so, we were there twice a day for little more than a couple of hours each time, the rest of the time he spent locked inside. No messes, none at all – that’s the kind of dog Max was.

This state of affairs continued for two weeks. It was March, but winter was hanging on and really bit in then with sub-zero temperatures and driving snow. The ground became as hard as concrete and every puddle turned into a skating rink. Max loved it. A German shepherd like him, with his thick heavy coat, I rather think not bred for the near Mediterranean warmth Essex often receives. Arctic tundra would be the perfect environment. Here’s an email I sent to Caroline during this time, reporting on the morning walk:

Well Max had a wonderful time. I took him down to the point where he did a stand up fall down slapstick routine on a frozen puddle, he was snapped at by a sheepdog, had his willy licked by a very insistent Labrador, and rolled eight times. 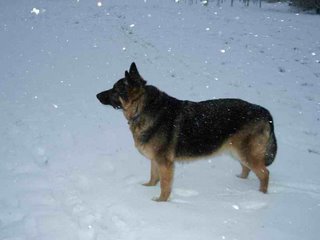 Of course things could not continue like this. Speaking over the phone, Marjorie’s daughter and Caroline both agreed that anything more than a couple of weeks would be unfair on Max. At the end of two week the daughter and her partner transferred Max to a local kennel, then went to tell Marjorie what they had done – she had insisted that he stay at home, again fearing that he might be taken away from her. We also learnt, during this time, that Marjorie had lied about her age to us: she had told her she was 74 when in fact she was 84 – rather selfish, I think, to buy an Alsatian puppy when in your 70s.

Max spent about five days in the kennel after which Marjorie returned home and he was returned to her, whereupon we commenced walking him again. We were now taking him out three times a week, for without too much persuasion from her we upped the frequency from twice a week (another walker from the Cinnamon Trust had visited but been rejected). Spring started to make itself felt and obviously Max felt it too, barking uproariously (all his fur standing up), at a cat in the back garden – his territory. This was the most noise we ever heard him make and seeing he like this brought home to us why sometimes people would step off the pavement to go round us when we were walking him. If he had been a vicious Alsatian, he could probably have taken someone’s arm off at the shoulder. He was a pussy (oops – sorry Max) and many other dog walkers in the park, having known him since the days when Marjorie took him there, knew this, and he always received lots of fuss from them.

Social services had provided Marjorie with a portable toilet downstairs, where she now slept, and a Zimmer frame – both of which she hated – whilst her daughter and daughter’s partner were making preparations to completely revamp her house and build a downstairs toilet. This was not to be; old-age removes dignity before everything else. Shortly after she returned from hospital, she began deteriorating again. Knowing we could access the key in its key safe, she no longer expended the energy to get up and let us in, though we always banged on the window to let her know we were there. On a couple of occasions we could not wake her – she was invariably asleep when we arrived – and we entered expecting her to be dead in her chair.
After a month Marjorie was taken back into hospital and Max moved straight to the kennels. She spent three weeks in hospital but still wasn’t well enough to return home, in fact, would never be well enough to return home. She was moved from the hospital into a ‘recovery home’. And Max? I’ll leave that for another time…