Since it is a good idea, I feel, to add variety to a blog (and not be too political all the time), here’s a shaggy dog story…

About two and a half years ago my wife, Caroline, decided to join the Cinnamon Trust. This is a charity that gets in people to walk and look after pets for those who are no longer capable. After she joined, a few months passed before anyone contacted her. Finally someone did, giving her the number of an old lady in Burnham (about four or five miles from us) who needed her dog walking. Caroline phoned and though the phone was answered she didn’t get much of an intelligible response, so decided to drive over. A very old lady with a hearing aid attached to an amplifier the size of a modern mobile phone answered the door – hence the problems with the telephone call.

Then there was Max.

At that point Caroline’s experience of dogs included an irascible spaniel and a small black wire-haired bitsa. Here she had been dropped in at the deep end. Max is a German shepherd and not a small one. When I first saw him I wondered where the saddle might be. After having a bit of a talk with Marjorie, and after receiving many warnings about the dangers of letting him off the lead, Caroline took Max for a short walk. Upon her return she asked if it would be okay for her husband came along with on these walks (it would have been understandable if Marjorie had said no, since old ladies living alone are prey in today’s society). Marjorie agreed and so it began. 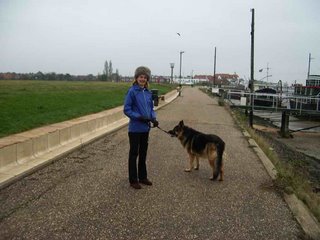 We started off walking Max two times a week. He was a bit fat and wheezy to begin with since he had not been getting much exercise. We walked him down to the local park and marina. He was rather dismissive of us. Yes, we were taking him for a walk which he liked, but initially he gave us very little response at all. As we walked him we started to take little risks, beginning by resting the lead across his back. Gradually we got more of a response. It often took Marjorie a little while to answer the door. She was deaf and, as we discovered, her hearing aid wasn’t a great deal of help and, though she might not have realised this herself, she was actually lip-reading. After a month or so Max understood that this couple were regularly coming round to take him to his favourite place where he could sniff the sniffs – catch up on the dog news – do his little back and forth dance to urinate in his precisely chosen spot to leave a reply. When we knocked at the door he would gaze out the window at us (he didn’t have to stretch since the window ledge was at back height to him – we are talking about a big Alsatian here), then proceed to run up and down until Marjorie woke up and noticed something was occurring. I think one of the watersheds in our relationship with this dog was the moment he did his first roll. Here was an Alsatian who was cool: he did his doggy things, sniffed and urinated and dropped a dump the size of Gibraltar (which I had to pick up in a bag) but apart from that running up and down performance it was difficult to know whether he enjoyed his walk. To then see a dog of his size getting his head down, flipping down on to wet grass and wriggling about with sheer pleasure was quite wonderful. He did this more and more frequently, hitting a max(imum) of twelve rolls in one walk.
As time progressed we trusted him more and more, despite Marjorie’s assertions that he would run away and we would never being able to get him back. We never told her. We walked Max then stopped for a cup of tea afterwards with Marjorie while we told her of his various exploits and the dogs he had met. Max was never vicious with other dogs. He would meet them nose to nose, sniff, wander around, wag his tail and move on.

There were a few heart-stopping moments. He became healthier and faster with this regular walking and once I had to sprint after him to stop him running out onto a road. We learnt where it was safe to let him off. His character began to show through too. While off the lead he would disappear around side routes then reappear on the route we were walking. He was having a game with us. I remember one occasion when he disappeared down some steps in the park. I chased after him, worried we had lost him then, huffing and puffing at the bottom of the steps, I looked up and saw him gazing down at me from the other side of some bushes at the top of a slope beside the steps (precisely where we had been heading). I climbed back and rejoin Caroline, and Max headed off again, looking back, tongue hanging out of the corner of his mouth, grinning. Cheeky bastard. 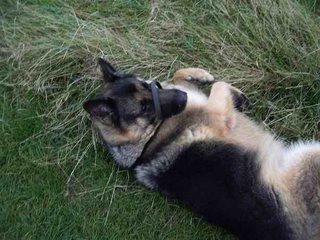 Here is a good point to look back on what we had thus far learned. Max was about the sixth or seventh German shepherd Marjorie had owned. Prior to us turning up, she had spent three months in hospital having shattered her leg falling down her stairs. Max had remained in the house with someone coming in to feed him and occasionally walk him. Marjorie had reached the stage of life where she was having trouble looking after herself let alone a big dog and a house and garden. Her house and garden were average size, the latter overgrown, muddy and full of what dogs do. Mud mixed with less pleasant substances was trampled into the carpet and spattered up the furniture – you let a dog of that size outside in winter and he’s sure to bring some of the outside back in with him. Max was also epileptic, which resulted in further problems. The house temperature was right for an old woman; it wasn’t right for a long-haired Alsatian. He slept in the porch on the lino-tiled floor – the coolest place. It was a situation that could not last – one we all come to kicking and screaming.

For Max, obedience training seemed alien territory. All the usual commands had absolutely no effect on him and the only reason he walked to heel was because the lead Marjorie provided was a kind with muzzle straps that closed if he pulled. After a little while we detached that lead from the straps and attached it to his collar, then, we discovered treats.

I don’t know how the treats thing came about. I’ve just talked to Caroline about it and we can’t really decide. At some point we began bringing pockets full of biscuits along during the walks and suddenly we acquired a dog that didn’t run away from us, who came when we called and who would sit on command. We were having a great time but, most importantly, so was Max. The high point of the walk was a little peninsular that jutted by Bradwell Marina. The grass grew long there and Max loved to roll in it three or four times, quite often nearly sliding down the slope into the estuary. At the end of this peninsular we sat on the seat and fed him some treats. Then, as winter started to dig its claws in, Marjorie became ill and had to go into hospital again.