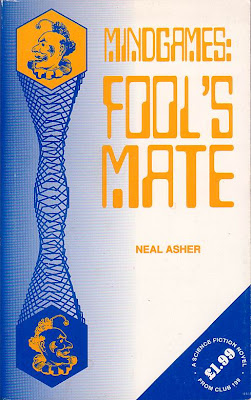 Prior to 1990 and maybe a few years afterwards, before my hair started to turn grey and before I becamesuch a cynic, I was a member of an ‘SF folio’ – a postal workshop. This consisted of a group of writers scattered about the country mailing each other their work for criticism. The postal folio contained a list of addresses, when I received it I inserted a chapter, or a short story or some other piece of writing, wrote criticisms of each other piece in the folio, then posted it on to the next person on the list. By the time it came back to me I had received criticisms of my piece from every other writer. I then took out my previous piece of work and inserted my next, and so the process continued.

Note: I can’t remember all the names of the authors in that folio, but do know that one of them was a guy called Conrad Williams, who you might be familiar with. Also, for those wannabe writers reading this, you can now find Internet versions of the above.

I wrote a novella during this called ‘To Die But Once’ and also began to have a smattering of successes in the small presses – for which payment was usually just a free copy of the magazine concerned – and I was always searching for new markets. I used to read ‘Writing Magazine’ and in there I found out about a new publishing company called Club 199 who were looking for novellas of about 40,000 words for which they gave a flat payment of £1000. I duly scrubbed up the aforementioned novella and sent it off. When I received the phone call telling me my piece had been accepted, I fell on the floor. Wow! I was being paid real money for my work!

Trying to be professional I then immediately went on to write another 40,000 word novella for the same market. This was The Parasite. Meanwhile Gordon McGregor’s Club 199 decided on a better title for ‘To Die But Once’ and changed the title to ‘Mindgames: Fool’s Mate’. It was published, I got my money, and then a short while afterwards Club 199 went skint. Having by then managed to make a small name for myself in the small presses I got The Parasite published with Tanjen, followed that with The Engineer and continued my climb towards Macmillan. I am, I think it’s safe to say, a ‘time served’ writer.

With this Kindle route to publication now available I’m once again going through ‘Fool’s Mate’. There’s a fair bit of work to do since the file is one that I converted from Wordstar on a 5.25 inch floppy disc – perhaps both of these are things that some of you have never even used. When I first converted it I had to employ find-and-replace to change words that had become hieroglyphs back into words again. Now I have to sort out formatting that’s all over the place, and of course plenty of crappy English. The novella is stunningly naïve, but fun. I’m not going to hammer it too much and when it’s ready it’ll be another one for Kindle publication.