Here’s some more from Andy Bryenton: 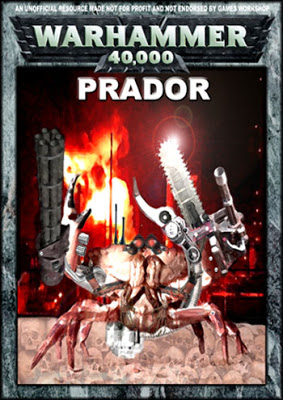 Key to the tactical difference between the Prador and other more conventional factions in 40k is the concept of chemical, pheromonal control and command. The most utterly alien aspect of the Kingdom, to me, is not the lack of compassion (we can see enough of that on the 6 o clock news among our own species, unfortunately), but the lack of free will.

To that end my ally in this project, Kurt, has helped by developing some tactical commands issued via pheromonal means, and a range of random consequences should any ‘junior’ Prador stray out of their elders’ influence. Obviously in terms of canon, it’s obvious that cunning individuals like Vrell can think for themselves, and know how to carry out a mission light-years from their old dad. But on the tabletop it adds a bit of narrative flavor if the scuttling hordes need to stay in some kind of cohesion, or else decide it’s a good time to knock off some sibling competition!

Also included is the draft of the cover – my apologies for my awful artistic skill, but hopefully that’s a menacing looking Second Child with some heavy weapons and a few cybernetic bits welded on…

For your perusal, then…

Prador orders do not take the form of spoken language, like the commands barked out by human drill sergeants or flickers of code as between engines of war. Prador utilize a language of chemicals and pheromones to control their lessers, commanding them against their will at a moment’s notice. Indeed, free will is an unknown concept in Prador society, where the might of the elder generations is made manifest through their undeniable orders.

Chemical Imperatives may be used at any time by Prador equipped with them – even during the opposing player’s turn.

When issuing a Chemical Imperative, roll a d6 for each Prador unit within 12”. On a 3+ they obey the chemical order given without question. On a 1 or 2, the shifting winds of the battlefield dilute the pheromones with the scent of blood and high explosives, causing confusion and panic. Squads who fail this roll are subject to Disobedience next turn.

Suppressing Fire! – any Prador of a lower Generation within 12” immediately fire their Railguns (not special weapon variations) at the nearest enemy unit. May not be used when locked in combat (8pt)

March or Die! – any Prador of a lower generation within 12” immediately make an additional run move on 2d6, taking all appropriate terrain tests. This move may not be used to assault enemies or exit combat. (3pt)

Shells Down! – all Prador of a lower generation within 12”dig into the dirt, effectively becoming living fortifications. Prador who are Shells Down benefit from a 2+ armor save, but cannot move during the movement phase after they re-emerge. (8pt)

Feed Me! – the nearest Prador of a lower generation is immediately sacrificed to regenerate a single wound on the issuer of this imperative. The Prador thus sacrificed must be of the right size – i.e. a Third Child must be sacrificed to regenerate a Second Child, a Second-Child for a First Child, and a Second Child or a First-Child for an Adult. Gulp! This imperative may not be played AFTER a Prador has lost its final wound to prevent its removal from the game. (10pt)

Feel the Hate! – all Prador of a lower generation within 12” gain the Preferred Enemy rule this turn against a single nominated race (usually the one they’re currently fighting, if the Prador high command have gotten their chemicals right!) (5pt)

Disengage! – any Prador of a lower generation within 12” who are locked in combat immediately break free and move 3d6, away from the combat. The enemy may not pursue or consolidate, as if the Prador unit had just Hit and Run. (8pt)

Destroy Them! – all Prador of a lower generation within 12” gain the Furious Charge special rule for this turn (5pt)

Scuttle! – any Prador unit of a lower generation within 12” completely ignores terrain during its next movement phase, except impassable terrain. (5pt)

No Mercy! No Quarter! – any Prador within 12”gain the ability to fire into a combat which includes models on their own side, so long as those models represent Prador children of a lesser generation or human thralls. Failed ‘to hit’ rolls are counted as striking Prador models! (10pt)

Perhaps no other race encountered by man is quite so alien as the Prador – except the Tyranid hive mind, which may or may not be cosidered a ‘race’ at all. By turns inscrutable, violent and downright stereotypical (in that they really do eat people!), these xenos have a society as complex as that of Man, with technology easily equal to our own. That being said, the alien predispositions of the Prador are never more apparent than on the field of battle.

Eaters of the Dead – Prador may never consolidate or make sweeping advances – instead, they devour the bodies of the dead, crunching bone and armor with their grisly mandibles.

Merciless – The Prador have no concept of a ‘right to life’ – their Children are only allowed to survive so long as they prove useful. Any unit of Prador Third Children who flee from battle (failed leadership test etc) within shooting distance of a railgun-armed superior (A Prador of the First, Second or Adult generation) is immediately fired upon by that superior, regardless of whether they have already fired their railguns this turn.

Pheromonal Web – All Prador are bound together by the will of their Sire, with a clear hierarchy delineating the chain of command. Every Prador in your army, excluding Drones and Thralls, is subject to the rules for Disobedience if they are not at all times within 12” of a Prador of a higher generation, with First-Child Tribunes and Adults at the top, First Children on the second tier, Second Children below them, and Third Children at the bottom.

Prador out of Pheromonal Web range at the start of their movement phase must roll on the Disobedience table.

When a Prador is out of Pheromonal Web range, or otherwise has to roll for Disobedience, roll a D6 and consult the table below:

1 – Slavish Devotion – the Prador continue with the mission plan, fearful of reprisal if they disobey!

2 – Where’d they go!? – the Prador must move toward a higher generation model this turn, and make no other moves. They may still shoot and assault as normal in the appropriate phases.

3 – Panic! – The Prador must move 2d6 scatter this turn, and make no other moves. They may still shoot and assault as normal in the appropriate phases.

4 – Run Away! – the Prador leg it 3d6 toward their deployment zone table edge. If they go over the edge they are removed from the game entirely. This move counts as ‘fleeing’ under the Merciless rule.

5 – Paralysed with Indecision – The Prador may not move, shoot or assault this turn unless compelled by a Chemical Imperative. If locked in comat, they may not attack or counterattack.

In cases where two or more Prador units are locked in combat with enemy forces and one of them rolls this result, ALL Prador in the affected combat assualt EACH OTHER this turn, while the enemy may choose either to stand there and watch (after all, it’s quite entertaining) or leave the combat and ‘consolidate’ away 2d6”. As they are not involved in the combat any more (internecine war is very single minded), no enemy models make any attacks or counter attacks this turn.

Prador locked in combat who roll this result count as (5), Paralyzed with Indecision.

Moves caused by Disobedience allow Prador to flee from combat – if they are locked in combat and are then forced to move (i.e. by Panic, Run Away, Where’d They Go?), they suffer a number of wounds equal to the number of enemy models who were in base to base contact with them. These may be saved as normal.