Skip to content
Well that’s strange. We’re on day 11 now of quitting smoking. I have noticed how much better some things smell and many things taste. I can keep on eating popadoms now whereas before they were just a fairly tasteless accompaniment to curry. Walking past a fast-food van can be murder. Shop-bought radishes and carrots do actually taste slightly of radish and carrot etc. But apparently things aren’t the same with wine.
One effect of stopping has been an inability to sleep well so, last night, I thought I might as well try drinking some wine to see if that would help. I deliberately left it late before cracking the bottle because I didn’t want to give the alcohol time to work on my will power. I opened a bottle of Hardy’s cabernet shiraz merlot that was a gift from Caroline’s mother and just the sort of thing we liked. The first sip was nice, the second was … um … and thereafter the wine was just far too strong flavoured and heavy. I even put half my second glass back in the bottle. While Caroline persevered with the Hardy’s I opened a bottle of less heavy Dreamtime Ridge. This initially tasted better, but then just went away from me. I sat there sipping it thinking I would rather have a cup of tea. 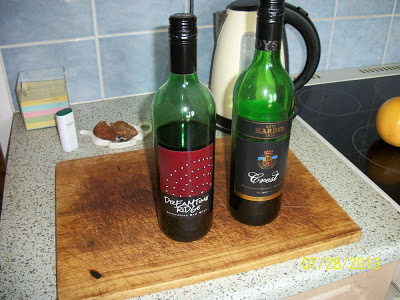 Maybe I’ll try some of those wines again, but not any time soon.