Since being taken on by Macmillan I’ve published getting on for 30 books, but not all of them are from that publisher. I’m not a writer who had instant success with a big publisher. As I have noted elsewhere, I climbed every step of the ladder, sometimes with people stepping on my fingers. I’ve had numerous short stories published in magazines that no longer exist now, novellas and collections similarly launched by ‘small presses’ that went to the wall, and others that didn’t and are still selling some of my old stuff.

All of this happened before the advent of Kindle and Amazon’s POD (print-on-demand) books. I went from sending stuff by post along with return postage to that excellent invention called email. Wow! I could send stuff without having to print it out! Though, admittedly, at the time small presses insisted on hard copy before any emailing happened. Then, as now, there were many wannabe writers who would have created an email deluge.

Anyway, since being taken on by Macmillan I’ve published a fair bit of this stuff on Amazon. Recently, because I could, I published a 21,000 word novella called The Bosch, and again discovered there are plenty of fans who don’t know about ‘My Other Stuff’. 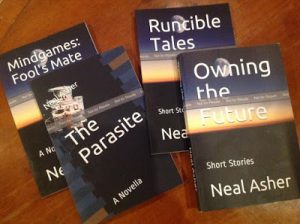 I’ll go through, kinda, in order of original publication. The first thing that was not a short story was a novella I originally titled To Die But Once. I’d found out about a press aiming to sell airport short reads called ‘Club 199’ and sent this effort of to them. It surprised the hell out of me to get an offer for it of £1,000 and I snatched it up. The novella (45,000 words) was duly published but then, not long after and (I think) due to changes in the ‘net book agreement’, Club 199 went down the pan. I didn’t my much like their title change to Mindgames:Fool’s Mate because it reads like an observation. Here it is on Amazon. It just has a generic cover on there, not this one. Up in my loft I have about twenty or so of the originals in shrink wrap – bought from a distributor who tracked me down in later years. I may sell them off one day. 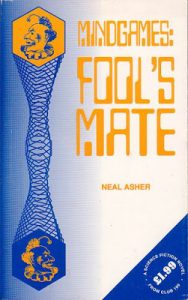 Jason Carroll, an ex SAS soldier and contract killer is convinced he will die in action. It is thus embarrassing when he is run over by a bus. It is even more embarrassing when he, an atheist, realises there is an afterlife…Resurrected on a huge flat plain, he is forced to play a deadly game. Moved as a pawn to the whim of the Gods in a fight to the death with warriors from all ages of earth’s history. Killed again and again only to be resurrected.

The General, the Grim Reaper and Anubis are some of the strange beings who direct this grisly entertainment. Is it real or only in his decaying mind. Who is the Clown? It there anywhere to escape to?

To retain his sanity, he must believe there is an end; an escape; a purpose. A thought-provoking story leading to an action filled climax that challenges our accepted beliefs…

While this was being published I was banging out stories to those small magazines when a new small press called Tanjen took an interest. First up they published a 40,000 words novella called The Parasite. After that they published a collection of short stories called The Engineer. Tanjen was another of those small publishers that went to the wall. The Engineer is still published by Wildside Press in the US (but available here too) but under the new title The Engineer ReConditioned with a couple of extra stories. The Parasite I published myself – again in a generic cover. 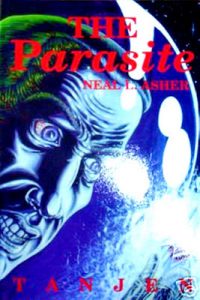 After mining complex ices deep in the Solar System, Jack Smith is concerned about his profit margin, but is it him who doesn’t want to face quarantine or something squirming inside him? The Cryon Corporation Director, Geoffry Haven, is also concerned about the bottom line and might consider Jack an expense he can no longer afford, though perhaps suitable for a starring role in a snuff movie. Meanwhile, the human and unhuman agents of World Health must investigate. Perhaps it’s time to deploy vat-grown killers and an anti-photon weapon, because the parasite is coming to Earth, and it’s hungry.

The Parasite was first published by Tanjen Ltd as an illustrated novella back in 1996. Tanjen closed down a number of years later and since then the novella has been difficult if not impossible to obtain. There are copies out there, but checking recently I haven’t seen one for below $50.00, which is a hell of a lot for something only 130 pages long and perhaps only for completists. I’ve edited it again, thought I haven’t been too heavy-handed since I didn’t want to deliver something that had completely ceased to be the original. This is my first attempt at self-publishing through Amazon Kindle. I hope you all enjoy it!

“Once again, Neal Asher gives his reader a meal of such exquisite taste that you’re left like Oliver, desiring more.” – Authortrek 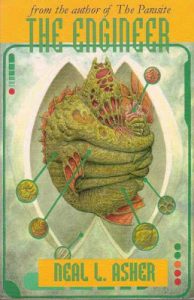 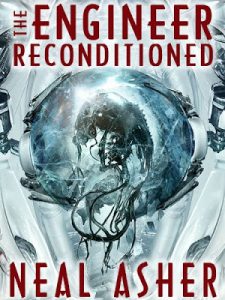 Mysterious aliens … ruthless terrorists … androids with attitude … genetic manipulation … punch-ups with lasers … giant spaceships … what more could you want? This great collection of 10 short stories by the author of Gridlinked, The Skinner, In the Line of Polity, and many more is a great read! 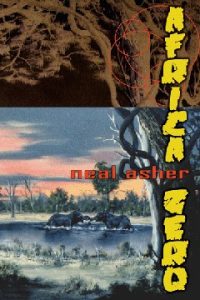 I also, at some point, did a couple of longish stories called Africa Zero and The Army of God and the Sauraman. These were first published in a magazine, but are now published under the single title Africa Zero by Wildside Press. Only available in paperback I think. 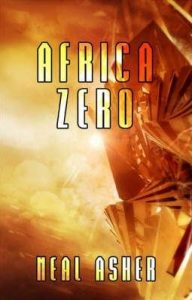 The novellas Africa Zero and Africa Plus One in one book. The Collector rampages across a far future Africa populated with gene-spliced vampires, resurrected mammoth, and nutters with APWs. But he can handle it.

In the late nineties, still looking to find homes for my stories, I came across a publisher called Piper’s Ash and sent them a few stories. They published five short stories under the title Runcible Tales and kept on selling this little chapbook even after I was taken on by Macmillan. When they too finally went to the wall I stuck that on Amazon too: 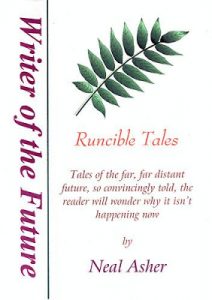 This is a ‘chapbook’ of five short stories so not very long (about 30,000 words). It consists of: Always With You – Webster engages on a mission to destroy a Prador planet breaker. It helps if you have Horace Blegg on your side, and an internal medic, but are these enough to overcome overwhelming odds? Blue Holes and Bloody Waters – marine biologist Karl finds that humans haven’t quite adapted enough – or have they? Features the first mention of the retro Anti-Grav cars featured in “Gridlinked” that I have come across Dragon in the Flower – Ian Cormac’s first encounter with Dragon – this is printed word-for-word in “Gridlinked”, so this should be the Runcible Tale most familiar to Neal Asher readers The Gire and the Bibrat – Telepath John Tennyson is given more than a helping hand by Agent Prime Cause in his search for the location of a scream… Walking John and Bird – John Walker consults Horace Blegg and Dragon with questions concerning his link with Bird, a seemingly invincible entity. Trouble is, especially where Dragon is concerned, he may not like the answers.

Another small collection was Mason’s Rats. These three short stories were first published in a magazine, then published in the form of a booklet the editor of that mag distributed at an SF convention for publicity. Yup, those too, though you can only get them on kindle as the amount of text is too small for POD. 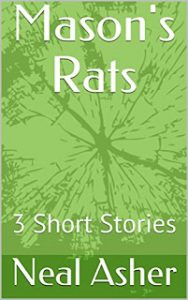 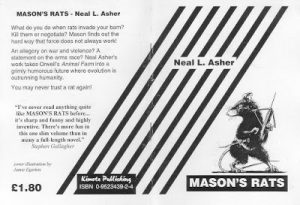 With the above I’d about caught up with the novellas and collections. However, I still had (and still have) numerous short stories that need a home. To that end I put together a collection of them called Owning the Future – this title because some are set in the ‘Owner’ universe of my books, some in the Polity and some elsewhere. 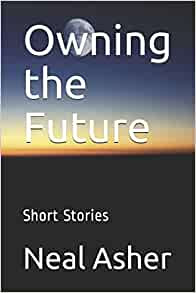 I have a varied collection of short stories in my files and, of course, the temptation is there to dump them on Kindle, take the money and run. However, though I think some of them are great, some aren’t, and some are profoundly dated. I am aware that there are those out there, who will just buy these without a second thought, so I have to edit, be selective, and I damned well have to show some respect for my readers. Kindle in this respect can be a danger for a known writer, because you can publish any old twaddle and someone will buy it. Time and again, I’ve had fans, upon hearing that I have this and that unpublished in my files, demanding that I publish it at once because surely they’ll love it. No they won’t. A reputation like trust: difficult to build and easy to destroy. I’ve therefore chosen stories other people have published here and there, and filled in with those I really think someone should have published. Here you’ll find some Polity tales, some that could have been set in the Polity (at a stretch) and some from the bleak Owner universe. Enjoy! Neal Asher 04/06/18

One outlier people may not know about is a short story, published in my collection for Macmillan The Gabble, that they put out for publicity by itself. This is Snow in the Desert. 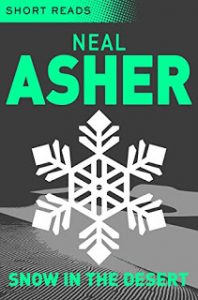 In the parched, arid wastes of this far-flung Polity world, Snow is being hunted. With a prize on his head and his life in danger, trust is a luxury he can’t afford. Hirald, pale and deadly in the blistering heat, is an ambiguous presence. But who is she? What does she want from him?
Mankind has sought Snow’s secret for thousands of years, and blood will flow in the desert before it’s revealed.

Snow in theDesert is compelling, brutal and lingers long after the final word: the perfect introduction to Neal Asher’s Polity universe fiction.

So now we’re up to date, or rather, up to date as I write this. In 72 hours perhaps not because I’ve stuck a novella up for Kindle and POD called The Bosch. 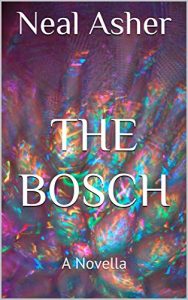 One thought on “My Other Stuff”