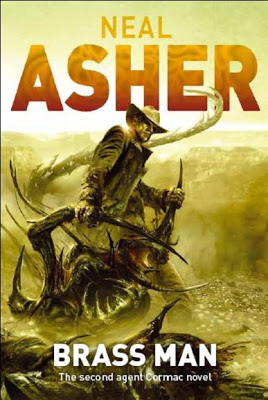 The knight errant Anderson is hunting a dragon on the primitive Out-Polity world of Cull, little knowing that far away a man has resurrected a brass killing machine to assist in a similar hunt that encompasses star systems. When agent Cormac learns that an old enemy still lives, he sets out in pursuit aboard the attack ship Jack Ketch … whilst scientist Mika begins discovering the horrifying truth about that ancient technology ostensibly produced by the alien Jain, who died out five million years ago.
On a planet roamed by ferocious insectile monsters the people of Cull must struggle to survive, while they build the industrial base to reach their forefathers’ starship still orbiting far above them. An entity calling itself Dragon assists them, but its motives are questionable, having created genetic by-blows of humans and the hideous local monsters before growing bored with that game. And now Cull, for millennia geologically inactive, suffers earthquakes…
Meanwhile a brass killing machine seeks to escape a bloody past it can neither forget nor truly remember. So mindlessly will continue its search for sanity, which it might find in an instant or not for a thousand years.