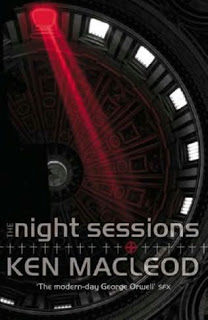 I think the last Ken Macleod book I read was either Star Fraction or The Cassini Division and Night Sessions definitely won’t be my last. It only took a few pages before I felt something loosening up in my chest because the pages were speeding past and I knew I was in safe hands. This was a thoroughly engaging tale, despite the ‘oops’ moments.

Though this book is great science fiction, it is also a demonstration of how there ain’t nothing that dates so quickly as science fiction. Here we have, as an essential plot driver, medical technology based wholly on embryonic stem cells – a route already being abandoned for adult stem cells. We also have global warming of the Gore/Hansen school – abandoned by the first for carbon trading profit, and preached with such hysteria by the second that a man in a white coat is edging closer, a syringe full of Thorazine concealed behind his back. But of course we must never forget this is fiction.

I think I was hooked properly the moment a main character peered out of his aeroplane window to observe a space elevator and, despite the SFX quote on the front ‘The modern-day George Orwell’ I found this very optimistic in tone. The victory of secularism over religion could be described as extreme optimism, and the sfnal future full of such great techno toys to play with is another form – Macleod did an excellent job of projecting how information technology might be used by a future police force, and really, you gotta love the lead detective’s three-limbed robot called Skulk (short for Skullcrusher). A worthwhile read, this.