So, despite all the shit that has hit the fan this week the work on the ruin is looking good. All the ‘sovar’ or rendering has been done inside, the plumbing is in and there’s actually running water up there now, the electrics are also in and the ‘karistoo’ path has been done down the side. Last week, before the puppy incident, we visited a window shop to get some prices and later a guy stopped off to take a look at the work. He was another that Mikalis had put us onto and I warned him that if the price was a piss-take I would be saying, ‘Oshi’. As it turns out we were pleasantly surprised. The price was high, but not rip-off. We had already checked what it might be by looking at wooden windows for sale on the Internet in Britain, then adding extra for the shutters and the fact that these would be made to fit. It seems that very shortly it will be time for tiling, and then going out to buy things like toilets and sinks. 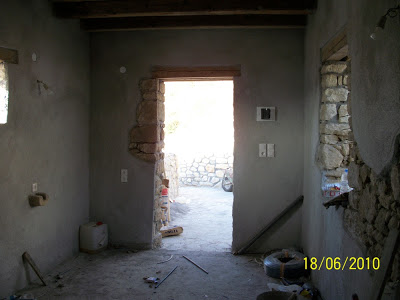 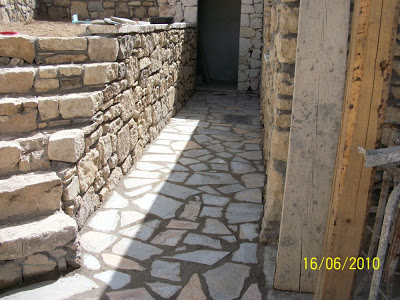 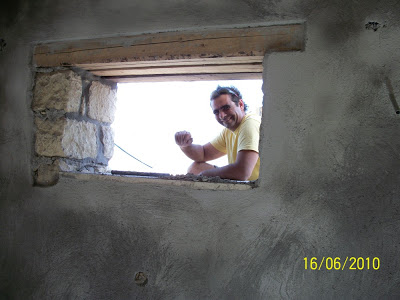 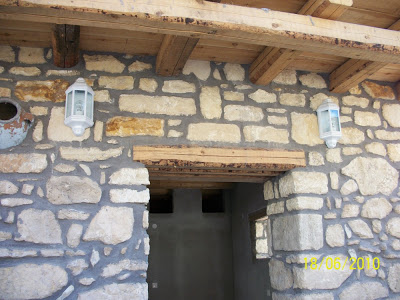 So here we are precisely one week after the subhuman child nearby set fire to a puppy. … You know, I write the words but they keep seeming ridiculous to me. They are the kind of words you use metaphorically or in analogy: ‘He looks so pissed off you’d think someone set fire to his puppy’. Anyway, getting back to that child; what is subhuman or, more precisely, subnormal? In Britain, when a child does something like this, the reaction of 99% of people is disbelieving horror. An army of child psychologists and social workers would be on the scene to deal with this problem child and his problem family. But I’m pretty certain that’s not the case here.

In the evening last Thursday, after Mikalis and his crew had gone, the child and his little brother finally ventured out. This was not a good move on their part since, at that time, Caroline was out watering the plants, and she of course went after them and started having a go at them. Shortly after this, three men turned up, possibly relations or friends of the family, at which point I joined in (I was tending to avoid the kids as my reaction would not have been verbal). I explained to the men, ‘Vazi fotia se mikro skilachi’ which is, ‘He set fire to a puppy’. One of the men laughed then stopped when I said, ‘Oshi ha ha ha ha’ and he saw my expression. I also at one point had the little brat concerned by the throat so I guess they figured I wasn’t happy. I thought the laughter due to the man thinking, ‘Ah, the Englishman is no good at Greek and has said something silly’. Now I don’t believe that.

Ever since we arrived here three years ago, when we go shopping in Sitia, we stop for a giros and a frappe in a Greek fast food place. The wife in the family that runs the place likes chatting to her English customers and I’ve learnt some useful words and phrases from her. This week I went shopping whilst Caroline stayed home to look after the puppy. I stopped at the fast food place for takeaway giros and as usual got a cheerful, ‘Ti kanis?’ which means ‘How are you?’ but translates as, ‘What do you do?’ (I’ll figure it out one day). Rather than reply, ‘Ime kala,’ or ‘I am well,’ I replied, ‘Then kalo,’ or ‘Not good’. The woman asked me to explain, which I did, both in Greek and English. There could be no misunderstanding. Her reaction was precisely zero then, when she turned away to work at something on a nearby counter, she looked to me like she was smirking. As he handed over my two giros her husband, however, could not have been clearer. He was laughing, with tears in is eyes. He then asked me, ‘Spirito?’ squirting an imaginary plastic spirit bottle – sold in all the shops here – towards the ground. Perhaps he had misunderstood. ‘Neh,’ I replied, ‘Yes’. ‘I love that,’ he said, obviously carried away by the hilarity of it all. I snatched my order from his hand and left. In retrospect I wished I’d asked him how amusing he’d find it if I shoved his head in his chip fryer.

A little thought later and I realised something. Long straight burns on the puppy’s back had puzzled me. I now realised they were caused by the long thin streams of spirit from the squeezy bottle. Most likely the person using the bottle lights the tip first then uses it as a mini flame-thrower. Something else occurred: there’s a picture of a badly burnt dog in the Gecko Bar – someone collecting funds for its treatment. This, I reckon, is a common occurrence here and, quite probably, the mountains and ruins are littered with the bones of dogs that have died in agony, saturated either with burning spirit or hot oil (Mikalis’s first assumption). And now I see that to these people, a boy doing such a thing is just acting precisely as it has been raised and to his parents is just normal.

I asked Mikalis if the people of our village probably think we are crazy, and he didn’t hesitate when he replied, ‘Yes’. A lot of the old people of the village have known starvation and when dogs are in competition with humans for food they’re going to lose. They keep lots of free-range chickens too and I perfectly understand their dislike of strays wandering into the village, I also think that in these circumstances it is perfectly acceptable for them to shoot any dog that is a danger to livestock. I don’t, however, understand the fear many Greeks have of dogs – a phobic reaction with elements of hatred and disgust in it. And this was a small puppy. It would have run in terror from the massive chickens here. It probably ran up to the boy, wagging its tail, waiting to be petted. It probably followed him about while he went to get his bottle of spirit and light the spout. Plain ugly cruelty; plain joy in seeing an animal in agony.

Back to the puppy, because I guess some of you reading this will want to know. It is eating, drinking and manages to wander about a bit. The rest of the time it is crying in pain when trying to stand up or lie down, or sleeping. It still manages to wag its tail, surprisingly. In retrospect, however, I wish I’d picked up the nearest rock the moment we got hold of her and put her out of her pain, rather than have put her through this last week. 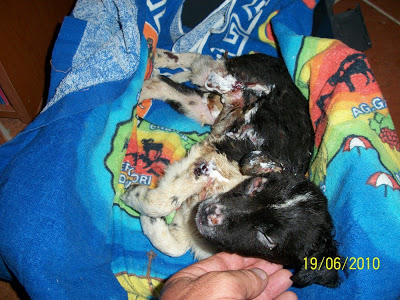 Too much, in the end. As some of the puppy’s skin started to fall off I hoped this a sign that it was healing. More and more fell off and the creature ended up in much more pain. I knew, as it lost all the skin across its stomach, that the skin on its back would go next. It would probably lose 50% of its skin and even if it grew back it was doubtful there would be any hair on it. A dog with exposed skin on its back on Crete is never going to be able to go outside for long. It also stopped eating and its suffering was such that we knew it could not go on. We said we would take it to the vet in Ierapetra to have it put down – an hour and a half to two hour drive away. Mikalis said no and took it the 15 minute journey to his home to put it out of its misery. He, or a friend of his, had a gun.