Caroline, who has a fascination with the Titanic, booked us up to go to the O2 yesterday (O2 is of course a better name that ‘Millennium Dome’ and its associations with the laughable ‘millennium experience’ and about a billion in wasted money, for a fucking tent) but, with the weather we’ve been having, we were starting to have second thoughts. However, in the end I said let’s just go for it, so we did. 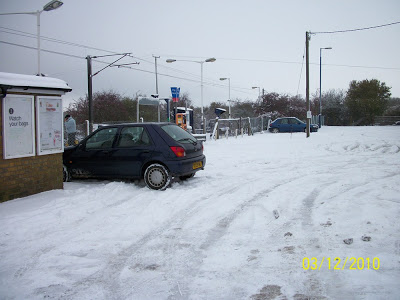 There was ice and snow everywhere and the road leading down to Althorne station was a sheet of ice (apparently roads to railway stations are not main routes that need gritting?), but if you don’t drive like a dick that wasn’t a problem. We parked at the station where only three cars occupied a car park that was normally full, and waited for out train, which was only a few minutes late. This would take us to Shenfield where we would then change for a train to Stratford, then hop on the Jubilee line heading for the O2. 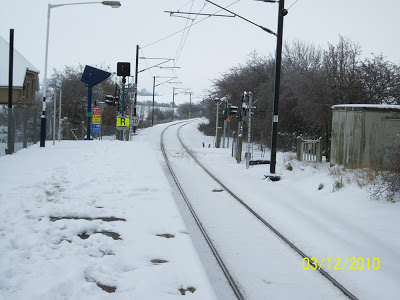 However, the train stopped at Wickford and we then had to wait for three-quarters of an hour for another train to take us to Stratford. Luckily the pies and coffee there were cheap and good and, during the ensuing journey, some lunatics dressing up as super heroes (on their way to a party) were aboard to cheer us up. 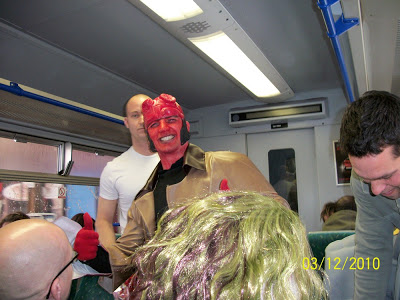 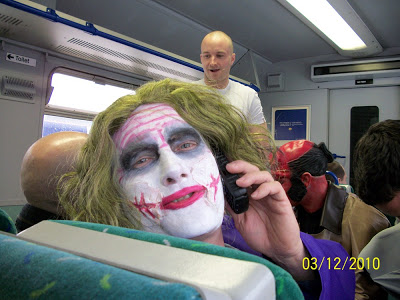 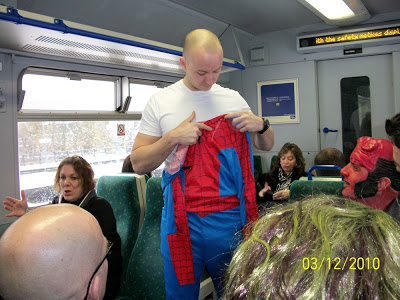 At Stratford, because we hadn’t actually checked which stop we had to get off at to get to the O2 we did that old-time British thing and asked direction from a couple of policemen. They hadn’t got a clue and were in danger of putting us on the wrong course until another traveller put them right. We had to go to North Greenwich. From there to the O2 is just a short walk, and soon we reached the ‘Bubble’ where the Titanic artefacts display was located. Unfortunately I can’t put up any photographs because we weren’t allowed to take pictures inside. It was all pretty interesting and the American staff there were very informative and helpful. We spent an hour and three-quarters checking out the exhibits. 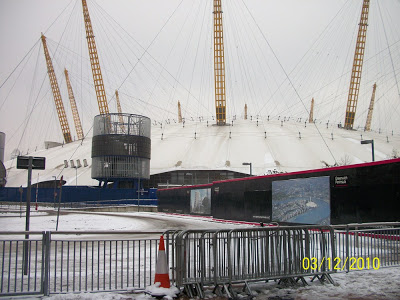 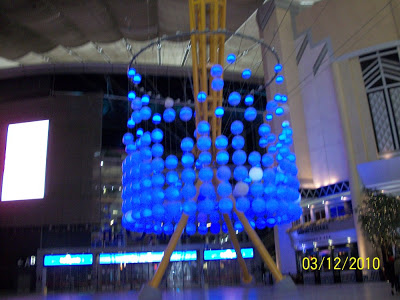 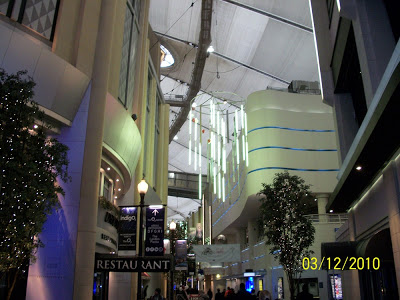 What they do, when you go in, is issue you with copy of a ticket for one of the Titanic passengers so, on the way out, you can see whether or not you survived. Both Caroline and I did survive, though she wasn’t in first class like me. They also take a photo against a green screen so on the way out you can buy a picture of yourself standing before the staircase Leonardo Dicaprio swanned down in the last scene of the film. Within the exhibition there is also a block of ice maintained at the temperature of the sea most of the passengers went into. Really, all they needed to do was turn off the heating. 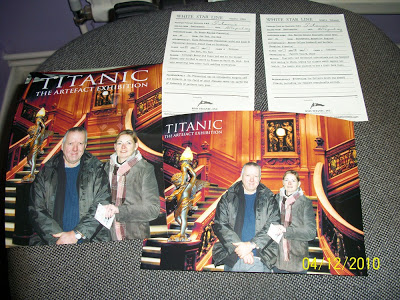 After this we enjoyed a meal before heading home. On the way out I got a proper look at what I have to put forward as a contender for any ‘ugly building’ awards there might be.

Stratford was a nightmare. It took us half an hour to find a platform at which a train was due to head in the direction we wanted to go. Whilst waiting there we watched the train before ours arrive, full of people and with loads of people on the platform wanting to get on. It was like a scene out of some disaster movie with the crowds trying to escape the tsunami or the Martian war machines. When the doors finally closed, leaving a lot of passengers behind, I half expected to see severed limbs on the platform. When our train arrived the scenario was little different and, of course, you find that once aboard the train the problem stems from selfish dicks clustering about the door and not moving on down the carriage.

This train took us to Shenfield where similar scenes were being enacted. I was waiting for station staff to come out with machine-guns and leashed alsations, but station staff were notable by their absence. Here, and at Wickford station was where I started to feel the urge to lob a brick at any visible loudspeaker. The phrase, ‘we apologise for any inconvenience caused’ tends to cause one to doubt if there’s any contrition involved when it’s a recording being played ad nauseum. It then occurred to me then that a better name than the one painted on the sides of the trains might be ‘National Excuse’. I also noted how the phrase, ‘for your safety and comfort smoking is prohibited’ was always immediately followed by ‘for your safety and comfort this station has CCTV’ (note: I might have the precise wording wrong here, but you get the gist of it). Another one was something along the lines of, ‘due to the adverse weather conditions the platform is extremely slippery’. Well, no shit Sherlock. 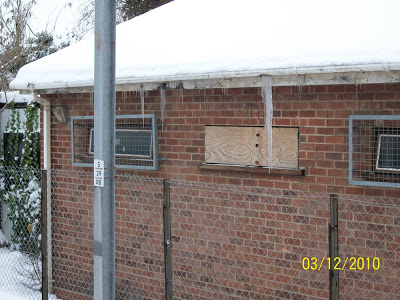 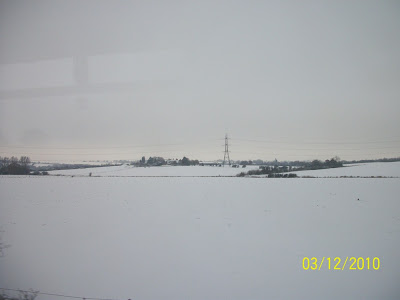 When we finally got home I had to drive back from the station in second gear, never going above about 20 miles an hour. The car is in the garage now and I’m sitting next to the radiator, never to venture out again unless for essential supplies. You guys who have to go through that shit every day have my deepest sympathy.