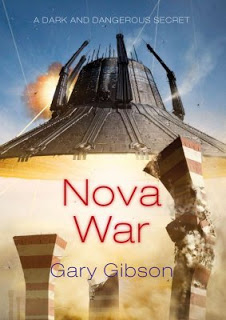 Righto, Macmillan kindly provided me with a copy of Gary Gibson’s Nova War. It should be enough to say that on the first day of picking it up I was busy and only read it for an hour or so, but on the second day I polished off the rest of the book. There’s a prison sequence in this that did seem to drag a bit, but not enough to make me abandon the book, nowhere near, otherwise it kicked along very nicely. For those of you that read and enjoyed the book before this, Stealing Light, here’s more of the good stuff. The title should give you a clue about how Gibson has upscaled the demolition. For those of you that haven’t read Stealing light, and who enjoy massive, violent balls-out sensawunda space opera, I suggest you go out and buy it, then read Nova War.
Here you have the Shoal, who control FTL technology and consequently rule a large portion of the galaxy because other races, without FTL, have become their clients. But these deep sea fish lied about being the only ones with FTL, of course they did, lying seems par for the course with a race whose arch manipulator has named itself ‘Trader in the faecal matter of animals’ (bullshit to the uninitiated). Now the Emissaries are on the scene and it’s beginning to look like Nova War is unavoidable. Oh bugger.