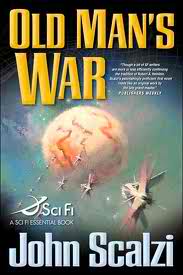 Well this should be pretty damned cool!

EXCLUSIVE: Paramount Pictures has acquired screen rights to the John Scalzi novel series Old Man’s War, with Wolfgang Petersen attached to direct and David Self adapting the tale into a large-scale science fiction project. Scott Stuber will produce through his Stuber Pictures banner, with Petersen also producing. The hero is a 75-year old man who, having lost the love of his life, is amenable to trading his old carcass for a younger, genetically enhanced body so that he can combine the experience of age with the strength of youth and join an outer space military coalition sent to protect human colonies in outer space. Inductees agree to leave their past lives on earth behind, and are promised land on distant human colonies if they live. Injured in battle, he’s rescued by a special-forces officer who seems to be a younger version of his wife. She doesn’t recognize him, but he’s so convinced he has another chance with her that he abandons his unit and risks everything to be with her. Kim Miller will be exec producer and Alexa Faigen is associate producer. Scalzi is a two-time Hugo Award winner who was most recently creative consultant on the TV series Stargate: Universe. Old Man’s War is the first title in a bestselling series that spans four books.