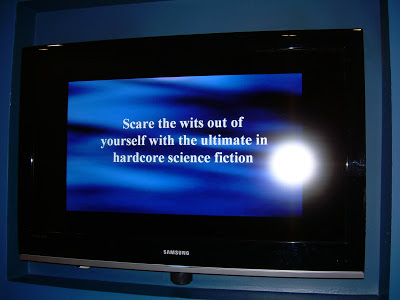 Caroline and I went to Macmillan yesterday, then on to lunch with the new senior commissioning editor for PanMac, Julie Crisp, and Peter Lavery, now retired from everything bar the part he loves, the actual editing, so he can still set writers quivering in their boots whenever he reaches for a pencil. Some interesting stuff, like the huge spread I have in DeathRay Magazine (more about that later), like changing my cover picture and, when the IT guys arrived, setting up a Macmillan-based website for me. But all that’s not the point of this post. 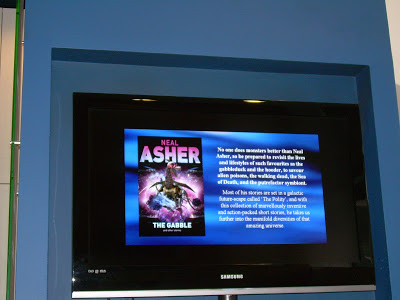 As usual on these visits, we were let into the lobby, signed in, then waited to be collected. Whilst there I gazed at the big flat screen they have up on the wall which has a constant slide show of books, their blurbs and taglines. I’ve sat there many times before hoping to see something of mine come up, but never seen it until now. It’s there, at last! Damn I’m sad.