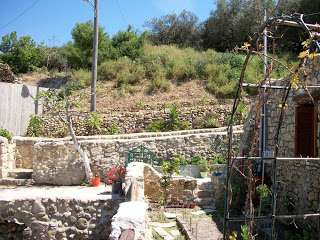 So here we are on Crete, or perhaps in Crete – I start to wonder about the distinctions when learning Greek since, the tourist phrase book tells me ‘sto, stin, stis’ translate respectively as ‘to the, at the, in the’ and in that respect is definitely a rough guide. Anyway, the house, though showing signs of damp with paint bubbling on some walls, at least hasn’t been leaking. This time we didn’t have to spend hours mopping dried mud from the floors – washed from the old internal stonework of the house because that’s how they built houses in Eastern Crete until the 1950s when, so I am told by a local, they actually started using a wonderful new invention called concrete.

However, as the previous picture I put up here showed, we did have plenty to do in the garden. It took us about two days to clear the jungle, and we were pleasantly surprised to find that as well as the nigh indestructible geraniums and yukkas, other plants had survived, including strawberries, one nasturtium and broad beans. We’ve now planted masses of seeds and eagerly await the first radishes, rocket, and other salad veg. I’ve squashed my first scorpion too – one of the joys of Cretan gardening.

Yesterday we ventured into Sitia to make enquiries about getting Internet up here at the house. We went to OTE, which is the Cretan equivalent of BT, since as yet we don’t even have a phone line. Having heard stories from others about them being sold a dial-up ‘package’ (the set-up is different here) because broadband was not possible, then later being sold broadband and unable to get the money back on that dial-up package, we were determined we would only have a phone line put in if we could get broadband too. No way did we want to end up paying the 15 Euros a month line rental without it.

As usual enquiries were hampered by the language barrier, my Greek being enough to make simple requests and understand simple replies, and the guy’s English being good, but just not quite enough. So, OTE could not provide broadband, but maybe Cosmote could at 30 Euros a month. Does Cosmote work up there? Um, I don’t know – we don’t have a phone line – if you can’t provide broadband, how is it some other company can? And why is it that you can’t provide it up in our village when people we know, in an even remoter village in the mountains, can get it (after having to pay for that dial-up package)?

I’m still none the wiser. Is it the case that Cosmote provide wireless broadband in certain areas? Is it the case that OTE just don’t deal with broadband, that you have to go to another company, and that they are like BT before they started providing broadband? Did the guy in the OTE office want to screw me for a dial-up package first (paranoia is very easy here)? Time to make further enquiries and our first port of call must be Stelios, the Cretan who sold us our house, speaks very good English, and knows the system here.

I really need that Internet. Working here, like this, using the Gecko Bar’s Internet connection is not enough to keep me on top of things.