I am constantly surprised by the prejudice I find in some against vaping – the unthinking bias and the fact-twisting. It’s taking millions of people out of a lethal habit, it’s saving lives, and in social situations it produces only the smell many already have pumping from numerous kinds of scent makers and air fresheners in their homes. My personal experience has been the loss of a smokers cough, a large increase in lung capacity (after a winter of vaping I was able to swim a mile non-stop whereas when I was smoking I could only manage a few hundred yards before stopping to cough my lungs up), loss of a skin condition, and no need to keep a Ventalin inhaler on hand so I could get to sleep at night and to jump-start my lungs in the morning. My risk of cancer, COPD and numerous other conditions is now in steady decline. In fact (though there are other factors involved), I am fitter and healthier now than I was 10 years ago. 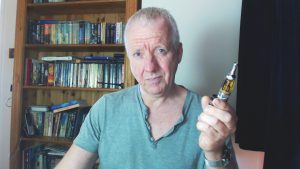 But I shouldn’t be surprised by the prejudice.

The dislike of vaping is rooted in a dislike of smoking. Simple. Smoking is being made socially unacceptable and the tar brush (sorry, couldn’t resist) has smeared vaping too, understandably, because the second would not exist without the first. Many people find it difficult not to conflate vaping and smoking. Some are like people who have grown up in a heavy drinking culture, maybe seen friends and family turned into alcoholics, and learned to hate everything about it. Next moving on into life with a puritan attitude they now frown at someone sipping a glass of red in the evening. Others are ex-smokers whose hatred of smoking (and anything remotely like it) is a necessary part of their psychology to stop them smoking again. Still others are merely the product of decades of anti-smoking social conditioning – social engineering – and simply swallow whole and unquestioning much of the nonsense spoken about vaping, because, of course, it confirms their biases. They see something in the mouth and a cloud of something coming out and, to their simple minds, that equals smoking.

Another problem here is the inability of some to separate two things: nicotine and smoking. This is again understandable. Maybe for some of you this is before your time, but I remember adverts depicting a disreputable and nasty top-hatted figure handing out wads of cigarettes to children. He was called Nicotine. This has been the whole zeitgeist about smoking for decades: smoking is bad and the prime actor in this is Nicotine. Well, it isn’t. Nicotine in and of itself is not particularly harmful, but it’s problem was that it is addictive, and the further problem was that for centuries the main delivery system of nicotine could kill you. Nicotine is not the problem, cigarettes are. Taking burning leaves, tar, carbon monoxide, heavy metals and a number of carcinogens into your lungs (from 50 to 150 depending on your source) is the problem. Vaping doesn’t do that.

Vaping is drinking coffee from a cup. Smoking is injecting caffeine with a dirty needle.

It is sad that many in the medical profession, and many of our law makers, have responded with a knee-jerk reaction – the prejudice I mention above. Without thinking very much, without actually looking at the growing evidence and, in many cases, falsifying stuff to confirm their bias, they moved to stamp on vaping. They want every ecig development put through expensive medical trials, they want the nicotine strength of eliquids limited to levels that make them ineffective – they want to limit, control, socially ostracise and stamp vaping out of existence.

There are other reasons here: pharmaceutical companies making millions from NRT are not exactly pleased about vaping, cigarette companies were not pleased either (but soon jumped on the bandwagon), and governments are not pleased (Oh my god, how do I put sin taxes on something that is stopping people smoking!) and also instinctively want to seize control of and legislate for anything new. But it is some in the medical profession for whom I have the greatest contempt. They’ve had careers telling people to ‘quit or die’ and now cannot quite comprehend this level of harm reduction. I can only style their reaction as not only prejudice, but jealousy.

But the evidence is coming in despite them. Even some medical organisations that were at first completely against vaping are now agreeing that it is 95% less dangerous than smoking. Grudgingly, I suspect, because they are having to respond both to the evidence and the ‘wisdom of crowds’ – those millions who are now free of cigarettes and feel very strongly about the vaping that freed them, and are vocal about it, like me.