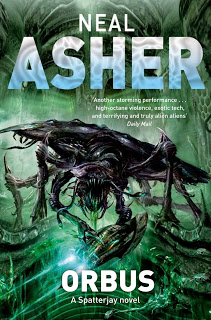 Neal Asher is another of those British writers of far future high tech space opera, like Iain M Banks, Ken Macleod, Alistair Reynolds, & Charles Stross (about whom I hope to write later). He’s constructed a particularly interesting & nasty future history of a distant & much changed humanity & what it meets in the far reaches of the universe. In his various novels, the star spanning Human Polity, run by massively intelligent AIs, has met an enemy species, the Prador, who apparently look a bit like huge & armoured crabs or lobsters. Asher has written a number of novels about the Polity Agent, Cormac, a few about other aspects of the Polity, & 3 about the effects of the planet Spatterjay & a peculiar genetic virus found there (which affects both humans & Prador). Although the Polity & the Third Kingdom of the Prador have ended a long war between them, there are still lots of border battles & lots of spying, etc, all of which come into play in Orbus.

And I can’t remember if I linked to Alex Cull’s review of Orbus. I particularly like the last comment:

As you have probably realised by now, I had a lot of fun reading this novel; and yes, I’m rather a fan of Neal Asher’s books, generally. Orbus isn’t The Catcher in the Rye, or Anna Karenina, but then it never sets out to be. There are indeed days when I prefer to read something like Anna Karenina. And there are other days, mostly after having done my level best to help prop up this country’s ailing economy for another twenty-four hours, when what I really, really want to read about – and nothing else will do – is aliens trying to murder one another with absurdly powerful military hardware.