Spoiler alert! Or, not really, because if you watch this film you’ll be tempted to shoot yourself in the foot in the hope of being invalided out of the whole terrible experience.

There’s a saying that war is endless boredom interspersed with moments of terror. If you were to substitute the word ‘action’ for ‘terror’, that would about describe this film. 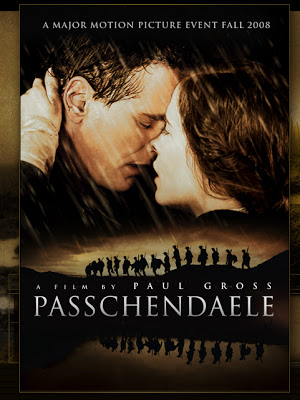 It started with and all too brief action sequence during which a small squad of Canadian soldiers attacked a German machine gun nest. This action was sort of okay, but slightly silly. For example I don’t really see an experienced soldier stabbing one of the enemy through the forehead with a bayonet. There’s too much of chance of it sliding off.

After this, our hero wakes up in a hospital in Canada where he is already in love with his morphine-addicted nurse. We then get 80% of the film taken up with an endlessly tedious love story, with subplots involving the nurse’s asthmatic brother, her and his German ancestry etc. The real bad guy here of course is a British immigrant in the role of a recruiting officer – a guy who looks precisely like how the propaganda posters of the time depicted the ‘Hun’.

I sat there smoking, got up to make some tea, drank some tea, scratched my balls, checked the clock. I was holding on in the hope that this would get back to the battle the film was purported to be about. It did get back to the battle, about ten minutes from the end. We got a bit of action, and it was completely spoilt by a rescue scene resembling Jesus plodding his final route to Golgotha. Oh yeah, then we got the death scene that was supposed to leave us sobbing in our cocoa, but by then I was pulling wool balls off my socks.