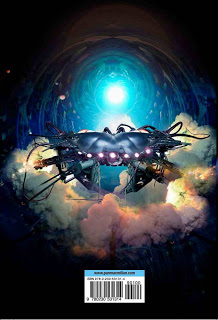 When I received the image of the full dust jacket of Prador Moon I noted that the picture on the back was from Hilldiggers. It was only when I noted it was also on the spine that I queried this. That image was only a mock up so I could see what the front of the book was like. Now, as you see, I’ve received the back cover image for approval. Damn, this is good. I’m thinking now that it really ought to be this one on the front!

9 thoughts on “Prador Moon back cover.”