Skip to content
Yesterday wasn’t a very good day. I managed to leave our freezer open all night and now it has apparently packed up, I dropped hot cigarette ash on a new blanket Caroline had bought in Crete, and then I had the horrible misfortune of watching Ridley Scott’s Prometheus. 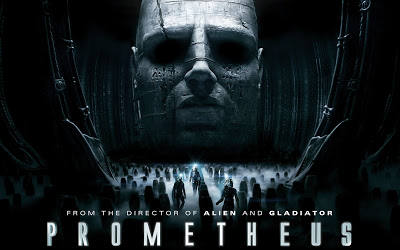 SPOILER WARNING!
What a spectacular failure this film was. It had many superbly cool elements in it that should have had the SF nerd in me squealing with delight, but unfortunately they were delivered with such a lack of coherence I started to lose the will to live about halfway in. This was a bad film and now I will talk about why I think it was bad so, if you haven’t seen it and haven’t noticed the spoiler warning above, stop reading now. And let me point out now before anyone offers explanations: yeah, I probably missed picking up on some of the exposition. That was because I failed to care.
Where to begin? How about starting with an octopus creature removed from a woman’s body by auto-surgery? This thing started off at about the size of a human fist and in a matter of hours grew into something the size of a car. Did it eat the auto-surgery? This was something that annoyed me in the original Alien film. I later discovered that the original script contained stuff about food stores being raided, but that ‘detail’ not appearing in the finished film was a fuck up.
Move on then to the female this thing was removed from. Apparently, along the way, she acquired super powers that enabled her to run like the wind and leap chasms with her torso sliced open and then stapled together again. Perhaps it was the power of her faith that kept her going – the same faith that made her realise that the ‘engineers’ had invited humanity to their home world. Oh sorry, that was wrong. Apparently these engineers had left messages throughout human history indicating the position of some sort of weapons dump or military research facility. Why?
Why did the android infect one of the scientists (archaeologists, whatever) with the stuff from pots scattered inconveniently across a floor like alien eggs? Because his delicate sensibilities were offended? Putting aside the sheer silliness of this infection turning said scientist into an octopus seed carrier, can I just point out that frying him with a flame thrower seemed like a rather extreme and irrational response? But then none of these people were behaving rationally anyway and no motivations were clear. Why did two of our intrepid explorers stay in that building? To get rich? Or to provide us with the convenient cliché of the idiots who wander off in the territory of monsters? Why did one of them then suddenly start treating a creature that seemed a by-blow of a snake and a flatworm as if it was Tiddles the family cat?
What was going on with that fucking big head? Yeah, I can see that the need was felt for a rehash of scenes from the Alien films with talking heads scattered about, but come on. So, this engineer’s head, severed apparently for a couple of thousand years and failing to decay, gets somehow zapped into life, bleeds a bit, bubbles up like an accelerated boil and then explodes. Why?
Then we have one of the cliché idiots coming back to the ship after having his snake pet wiggle into his mouth. He’d undergone a similar transformation to flame thrower man but in his case, instead of turning suicidal, he turned psychotic and started killing everyone. Why?
Now let’s look at the ending. Along the way our intrepid heroes have learnt that underneath that building is an alien ship apparently full of bioweapons to be used against Earth. How they learned this is a mystery. Apparently, the all-knowing Alien films android cipher learned this but I didn’t spot him telling anyone earlier on. These weapons are to be used to clean the slate to ‘start again’, so he later told super woman. Why would you want to spread something across Earth that seems to generate all sorts of fast evolving life forms that are as hostile to you as anything else? Now, I could think of explanations for this just as I could think of explanations for so much in this film. I could write this as an off-shoot of some war between two factions of the engineers. But that’s not my fucking job!
Moving on… super woman runs back from the launching alien ship and, over suit radio, tells the captain of the Prometheus that if the alien ship gets away there won’t be any Earth left to go back to. This guy is then apparently so convinced he decides to be a suicidal hero by crashing Prometheus into the alien ship. His two crewmen go with him because … well because obviously you at once decide to kill yourself at the babbled behest of someone with a torso of steel. Where they on fucking drugs?

This film was a colander of plot holes, undeveloped characters who did stuff without motivation (and who I failed to give a shit about), crap story-telling, and Alien films clichés and rehashes. It was visually beautiful and special effects were superb, but we’re past the time when the new gobsmacking stuff like that was enough because now everyone can do it and it’s time to return to the real foundation of such entertainment, which is story-telling. And finally, and most annoyingly of all and most sad, it could have been brilliant.

One thought on “Prometheus”