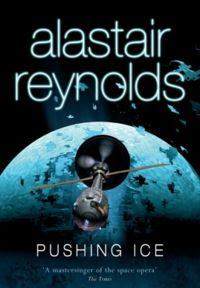 So Janus, one of Saturn’s ice moons abruptly takes off out of the solar system, shedding ice and rock as it goes to reveal the alien spaceship underneath. Fortunate choice, and in every sense, since Janus is the two-faced Roman god of gates and doorways. I could ramble on like the most anal of SF reviewers about how this was an ongoing theme throughout the whole book, but such themes can be found in any book.
Then, after Bella Lind puts it to a crew vote, the mining ship Rockhopper sets off in pursuit. A human story aboard that ship, friendships tested, broken, healed, life and death decisions to be made and sometimes not made too well.
I had a little problem with some of the characters, not because they weren’t well-drawn or weak as some reviewers seem to think, but because they were annoying. I constantly felt that they needed a kick up the behind, whilst one of them could have done with a rock chisel through the back of her head quite early on. Also there was what I’ll describe as a black box MacGuffin that fizzled a bit. Minor points, really.
All this was set against a backdrop of the immensity of space and deep time lovingly illustrated by Reynolds’ knowledge of astronomy and relativity, vast and ancient alien technology, human technology taken to the limit too, and aliens. Yup, sensawunda here, and Pushing Ice pushed all my buttons in that respect. I enjoyed this and I’m glad I bought it.