Last year I was steadily going through my SFF book collection, cataloguing it and photographing it, and putting the pictures and lists up here just for interest. This morning I woke at 5.00 and couldn’t get back to sleep, so I got up, cut my hair, had a shower, then climbed up into the loft and started sorting through those books again. I’d reached the letter P before, so now let’s go on to R. 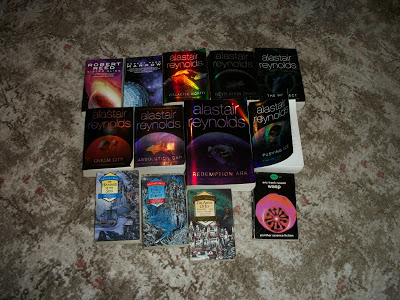 There’s not many Rs here and looking through my ‘Encyclopedia of Science Fiction’ I can’t see any others I would have wanted to include. Maybe if I had an encyclopedia of fantasy I would have found more, and maybe I should have included Rowling, but they’re Caroline’s books.

MICHAEL SCOTT ROHAN:
THE ANVIL OF ICE
THE FORGE IN THE FOREST
THE HAMMER OF THE SUN