So, yesterday we took the 11.05 train from Althorne to Wickford then went from there to Liverpool Street. Whilst we were travelling I kept adjusting my short introduction to the Spatterjay novels and was looking over the lists of questions I’d put together for this interview/conversation with William Gaminara. The questions for him to ask me I’d taken from various interviews I’ve had, whilst those for him to answer were from the surprising lack of information about him on the Internet. I’m guessing that despite being a well-known actor in Britain he’s probably a very private individual.

As it was I had even less time to fret. Initially we’d agreed to meet Stacy Patton Anderson (Acquisitions Manager for Audible) for lunch near Liverpool Street, whereupon we were going to go for a wander about, then head at 5.00 to the studio being used for the recordings. However, it turned out that Mr Gaminara was going for an audition (he still has to audition?) so the recording time was moved to 3.00.

We met Stacy, a pleasant American lady, in ‘Canteen’ in Spitalfields at 1.00. This seemed to be a slightly trendy place i.e. it had acoustics that severely hampered conversation, communal tables, uncomfortable backless chairs and expensive but average food. I’d brought along a selection of books for her that I handed over, and then, after eating, she took a further look at my intro and suggested some changes, which we made. After that we took a tube to Edgeware Road whereupon Stacy tracked down the Lisson Street studio with some sort of app on her phone.

Approaching the glass doors we immediately recognized Mr Gaminara inside – it’s that thing about actors: you recognize them like people you’ve known for years, but of course you don’t know them at all. On about three occasions whilst in London I’ve turned to say hello to someone I know, then stopped myself because I only knew that person as Inspector Burden from Wexford, Neil from the Young Ones or Prunella Scales from Fawlty Towers. You feel such a fool but, of course, they are used to it, and are immediately aware that they’ve been clocked.

I said hello to William, thanked him for his reading of my books, said hello to Vicky Bennett (Assistant Producer) and the sound editor John Moreland, whereupon we all trooped upstairs to the studio and generally had a chat. Apparently William hadn’t read any SF since Asimov many years ago. Still, I handed over some books – if not to lure him in then hopefully so he can start thinking about how he would read the Cormac series! Anyway, he seemed like a nice guy: professional and intelligent, paying attention to everyone around him and not in the least egotistical.

Just a note here: funny how though the people in the studio kept referring to him as ‘Willy’ I can’t bring myself to use that name here. Just goes to show how, maybe unconsciously, we so associate the actors with the roles they play. Damn it, he’s not Professor Leo Dalton! 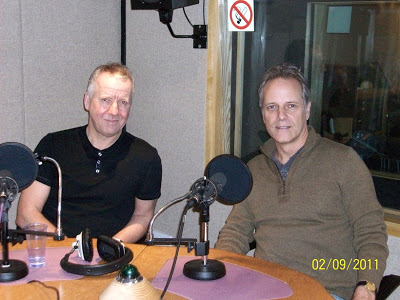 We both went into the recording room which was a bit like a radio studio with spectators, producer and sound guy on the other side of a viewing window (In the picture Gaminara is the guy with only one chin and a face undamaged by acne rosacea). Whilst they were sorting out the sound levels I tried one of my questions to him and immediately made a cock-up, saying he’d written the scripts for The Lakes, and being corrected by him. In fact the series was created by and mostly written by Jimmy McGovern, with co-writers of some episodes being William Gaminara and others. Shows you how you can go wrong on the Internet.

When we got into the interview/conversation we hardly referenced the questions at all. Vicky Bennett occasionally asked us to focus on this and that and, at one point, according to Caroline, gave up because she couldn’t get a word in edgewise. Afterwards I was told it all went well, but I always take that with a pinch of salt nowadays. William then went off to do his audition – and will be back in the studio recording the audio version of the John Christopher Tripods series today. It might be interesting to get hold of that since, as I recollect, the TV version was never completed. Stacy also went off to some sort of meeting. In both cases, because studio time was limited and they wanted me in to record the intro, I forgot to sign their books. I went through the intro, repeating the bits I screwed up so it could be edited together later. As I stepped out it amused me to hear Vicky say (the first time anyone has said this to me in my life), ‘That’s a wrap’.

Leaving the studio we wandered around for a bit looking for somewhere to get a drink – I was wired – then got fed up with that and headed home. Caroline immediately brought me down to earth by getting me to take the rubbish out, then I made a dent in a bottle of Edradour I got for my birthday whilst we watched Taggart and some more episodes of The Shield.

Interesting interlude, but now back to the day job.