Skip to content
One of the things I’ve been noticing over the years is how though I can read or watch and enjoy fantasy and the most outrageous science fiction (and write it) I find myself failing to suspend disbelief when it comes to supernatural stuff that hits closer to home. This is because I simply don’t believe in the soul, ghosts or an afterlife of any kind. I never have, and I guess the hardening of my attitude comes from getting older and seeing people all around me turning up their toes. Death is very final, harsh and uncompromising, which is why people like to believe it isn’t the end. 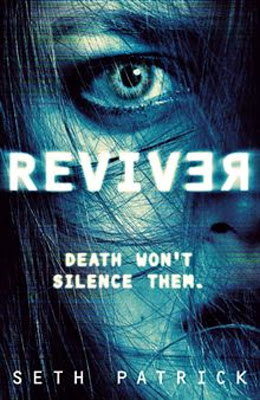 When I realized what Reviver was about I thought I would probably be abandoning it after a chapter or so. The first line grabbed me: ‘Sometimes Jonah Miller hated talking to the dead’ and the ensuing paragraph was damned good too, but I was still doubtful. However, as it progressed and I realised Jonah was ‘JP Miller duty reviver’ just doing his job at a murder scene as part of a forensic investigation I was fine with that. The combination of a hint of the supernatural with real world police investigation works, and is a good idea. It’s not a new idea since I’d come across it just a few weeks before in Eric Brown’s Necropath (much more sfnal) but it was done in a way that seems very new to me. As it progressed and filled out with the story of revival, and its real world effects, my disbelief was forcibly suspended and I settled down to enjoy a good read. I ploughed through it quickly, staying up late to finish it. What it has also done has reminded me that when I read Stephen King I was fine with the supernatural, and that maybe my aversion to it is more due to the crap TV production of the stuff and not the books. That being said, this would make a great TV series: a combination of CSIand Afterlife. I’ve since learned that it has been bought by Legendary Pictures, the company behind The Dark Knight Rises, Inception and Watchmen. Good.
Highly recommended.