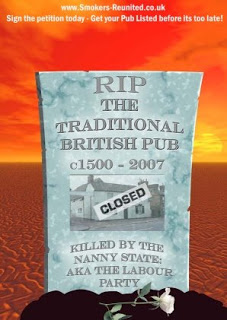 A website here blowing all those ASH and government (same organisation really) anti-smoking ‘facts’ out of the water. Here’s an interesting bit about the effect of the ban on our pubs: The financial analysts Goldman Sachs – hardly a “pro smoking organisation” – recently stated that the smoking ban has reduced average pub profits by 10% . Scottish & Newcastle, the UK’s largest brewery estimated a 8% fall in beer sales in January and since then beers sales in the UK have fallen to their lowest level since the Great Depression. But most devastating to the ASH version of events are the statistics for pub closures which accelerated dramatically in 2007. The trade journal The Morning Advertiser blamed this squarely on “the savage impact of the smoking ban and spiralling costs” and the figures require little comment:
2005: 2 a week 2006: 4 a week 2007: 27 a week Those non-smokers who were, apparently, driven from pubs by all those nasty smokers, better hurry and get back before the pubs are all gone.