Skip to content
Having an HDD/DVD recorder, numerous free view channels and ease of recording through a contents list is a wonderful thing. I’ve been picking up on some excellent documentaries repeated on BBC4 and elsewhere (particularly like Versailles recently, and some repeats of Horizon) and a few films I missed out on or wouldn’t have bothered recording if I’d needed to go through the whole set-up rigmarole. Also enjoyable on free view are repeats of QI on Dave, and the historical stuff on Yesterday.
I recently watched Hell Rider, which was dreck, but I also recorded one called Soldier – an SF film I’d never heard of and recorded only on the strength of it having Kurt Russell in it. I’m glad I did. 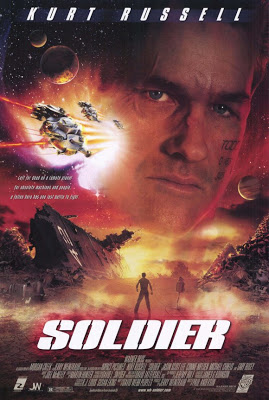 The film started out with scenes of children being raised as soldiers, much of their training, followed by battle scenes that caused a sinking sensation in my gut. I thought I was going to be watching another load of dreck like Hell Rider. As the film progressed I realized that this could have been a really crappy film. However, the acting carried it. Kurt Russell as the brain-washed dehumanized soldier, rediscovering his humanity, was superb. It was interesting too to discover that a co-writer of Blade Runner – David Peoples – wrote this as a ‘spiritual successor’ to that film. It was, and not just because one of the battles happened to be called Tanhauser Gate.

This is well worth watching, in my opinion. Screw the negative reviews.