Damn but I love this shit: 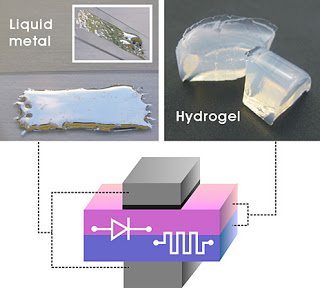 So (Ju-Hee So) says these quasi-liquid components could one day be used to build bioelectronic circuits to provide connections between living tissue and computers, such as brain-machine interfaces. “People want to put information into the brain and read information out,” she says. Such an interface might, for instance, allow an amputee to control a prosthetic limb the same way he would control his real limb—with just a thought. Similar devices made with conventional technology tend to be rigid and must be encapsulated to protect the electrical circuits from the moisture inherent in biology. So believes the materials her team is working with will be compatible with human tissue. Gallium salts, for instance, are injected into people to improve the contrast in scans of human lungs, and hydrogels have many biological uses. The devices might also be used as components in artificial neural networks, an application to which memristors are already being applied in earnest.