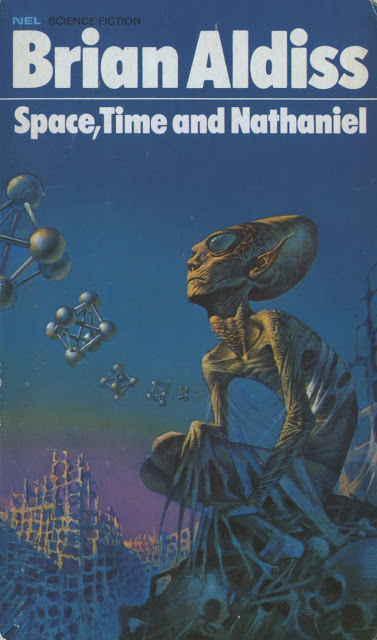 In the foreward of Space, time and Nathaniel (NEL 1971), Aldiss asks, ‘What happens to old science fiction? Is it as expendable as last year’s calender?’ to which the answer is, ‘Maybe.’ Nostalgia comes into play, and SF, though usually concerning the future, possesses a history worthy of study. In technical detail, science fiction stories do date quicker than bananas. Already with some of my own short stories I’m finding evidence of a lack of mobile phones, and when you look back to stories published more than thirty-five years ago you can but cringe when Captain Zorge calculates his next hyperspace jump on a slide rule. My edition of Stan (the acronym by which this book came to be known) can only be described as much loved and deeply in need of Sellotape. Just looking at the cover with its acorn-headed failed man gazing with its huge turquoise eyes into some immeasurable distance, sitting cobwebbed on a pile of bones, provides me with the thrill of remembered reading pleasure. Yet, Aldiss says of even this edition, ‘a whiff of period charm hangs over it’. However, Stan contains what for me are some of the classic short stories of the genre, and is well-worth a read for any of those who might think they are doing anything new. My favorite has to be The Failed Men. This excellent time travel story tells of a relief effort run by the fourth millennium Paulls to which twenty-fourth century humans have been recruited – both races brothers in comparison to the people, of millions of years in the future, that they are trying to help. And what is the plight of these last? They have buried themselves alive because they have ‘failed’. Put across in this story is the incredible frustration of the rescuers in trying to find out precisely what is meant by that failure – frustration in some cases leading to despair. No real explanation is offered and it is from this enigma that comes the appeal, that and the sheer story-telling ability. I don’t know whether or not this book is available now. It ought to be, not least for students studying the genre, but mostly because, slide rules aside, a good story is timeless.