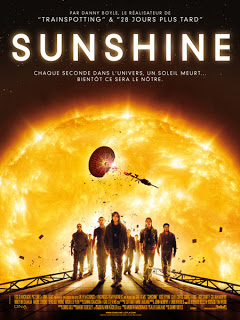 With a growing feeling of disappointment I watched Sunshine last night. Certainly there were some superb effects, though with a distinctly Kubrik 2001 retro feel, but that was about all. I somewhat doubt that the crew would have been the best choice to save the entire human race, but was prepared to let that go. I couldn’t, however, sufficiently suspend disbelief to accept a fusion bomb the ‘size of Manhattan Island’ would boost the sun’s output. The sun is a massive fusion reaction and dropping such a bomb would be equivalent to boosting a fire the size of Jupiter by dropping a lit match into it.
Other problems too: a guy caught out on the shield protecting the ship from the sun is burnt up in a tsunami of fire … erm what exactly was burning? The crew also began to run out of oxygen, apparently, whilst occupying a ship whose interior seemed the equivalent to a number of Albert Halls. Then, rather than continue a story of humans vs the hostile reality of space – which really could have worked – the whole thing lapsed into an Alien aping cop-out.
Really, there was no need to have a nutter creeping around offing the crew – the groundwork had already be laid for some serious moral quandaries and killings threafter. And really, adding camera distortions on top of film taken by a cameraman apparently suffering from delirium tremens adds nothing, just makes the whole viewing process irritating.
Here was a film that couldn’t make up its mind whether it was 2001 or Alien, and ended up being neither them, nor what it could have been.