Skip to content
Syzygy by Michael Coney was first from that stack of second-hand books I picked up in Hastings. I immediately found it a little disappointing. If I had read it when it was published in 1973 my reaction, as a voracious consumer of any SF, would have been different. But the world has moved on since then, and so have I.
The sfnal idea here is of oceanic plankton breeding every 52 years and, in the process, forming briefly-lived minds to protect itself. These minds control the local blackfish (sharks really) to attack and kill the fish that would feed on the plankton. This effect spills over onto human colonists causing a telepathic amplifier feedback effect on emotions, resulting in violence and various irrational behaviours. In essence: you really don’t want to know what people think of you. The human government responds to this with an attempt to poison the minds and, becoming aware of the humans, they respond by trying to drive the humans into the sea to be torn up by the blackfish. 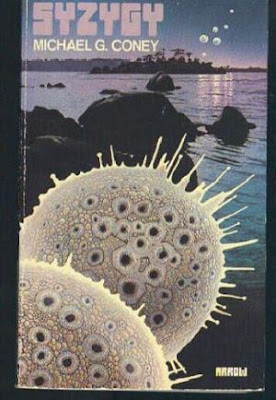 Intertwined in this is a human story concerning a bereaved husband falling for the sister of his dead wife, along with a mystery about how she died – all resolved in the final scenes. I’ll go into no more detail about it than that. I found it all a bit prosaic and a struggle to get through because, really, I was after the sfnal hit. In fact, beyond the plankton minds, it all struck me as a bit lacklustre. This could all have been about mind-controlling plankton arriving at the coast of some US town in the fifties. While in science fiction one must suspend disbelief, in old SF one must extend that suspension to cover, in this case: fifty-year-old technology on a colonised planet, and the mores of that time. One just has to laugh a hollow laugh when only a woman is capable of properly cleaning our hero’s house, and when that same hero, upon sensing the thoughts of a pipe-smoking psychologist, has a homophobic reaction that would today have the writer strung up by the thumbs, albeit the reaction was that of the protagonist.