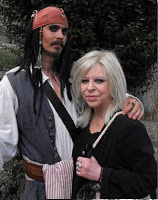 When, after over a quarter of a century of scrabbling up the writing ladder I was finally taken on my Macmillan, I started to get invites to ‘author events’. At these I met various authors, but generally they were fairly new ones who I didn’t really know. At one such event (I believe it was the launch of Cecelia Dart-Thornton’s ‘The Ill-Mad Mute’, but I could be wrong) Caroline and I installed ourselves in an upstairs room of the pub The Princess Louise (nice history there – it was, so I was told, Dennis Neilson’s hunting ground).
We were quite new at this game and quite nervous of it all. We sat chatting to some people, but I couldn’t help but notice one guy who sat up at the bar by himself: very slim, looked to be about seven feet tall, long black hair down his back – if you wanted to get contemporary about it he could have been a member of the Jacob’s gang in Twilight.

After a little while, he came over with my boss at the time, Peter Lavery. We chatted and he was very pleasant and all I learned at the time was that his name was John. Peter later informed me that his full name was John Kaiine and that he was Tanith’s Lee’s husband. He’d come over to chat to us because we seemed to be some of the few people in the room not disappearing up their own bottoms.
Subsequently, when invited to Peter Lavery’s Victorian abode on the South coast I got to again meet John and to meet Tanith for the first time. Extreme fan-boy moment. Tanith Lee is a writer whose work I’ve enjoyed for most of my reading life. Here was a giant of fantasy fiction, a quick glance at her Wikipedia entry gives you some idea of what I’m talking about:
She is the author of over 70 novels and 250 short stories, a children’s picture book (Animal Castle) and many poems. She has also written two episodes of BBC science fiction series Blake’s 7.

I got hooked into her writing by The Birthgrave, probably not so long after it was published in 1975, and I read her stuff constantly ever since. I list Volkhavaar as one of my top ten fantasy books (on the Guardian website I think) and really, I don’t see it ever dropping out of that list. Her books are ones I’ve returned to in later years and found have lost nothing by either them aging or me aging. I recommend you check some of them out. All of her Tales From The Flat Earth are good, I can also recommend books like Elephantasm, Vivia, The Storm Lord, East of Midnight, Heartbeast … actually I’ll stop there. Better to say that I haven’t read one that I haven’t enjoyed.
An enjoyable time was had by all, involving copious quantities of alcohol and then a curry. All the time I still could not dispel that ‘Wow, that’s Tanith Lee sitting there.’ At later events I’ve met and briefly chatted to Harry Harrison and Michael Moorcock and, even though those too were fan-boy moments, they weren’t quite like the first time.
Anyway, John and Tanith could not have been nicer, despite what they were going through at the time and which she’s now revealed on her website. It seems even the immortals cannot avoid cancer, though it has been knocked back.