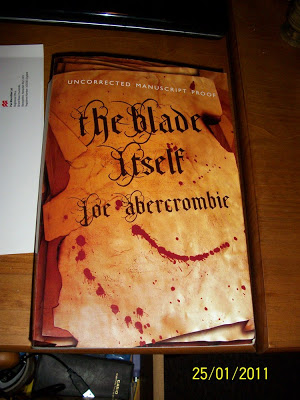 When, on the first page of The Blade Itself, a major character went ‘Eeek!’ as he avoided a spear thrust, I nearly put it aside. My feeling was one of, ‘Oh FFS, not another fantasy with a central silly character who bumbles through the plot tripping over his magic sword squealing and running away then managing to destroy the [insert relevant baddy] through pure luck.’ But the writing was engaging and I carried on. This particular character developed into one who really wouldn’t go ‘Eeek!’ so I wish an editor had had the presence of mind to strike a line through it. The other subsequently introduced protagonists were also well-developed in this character-driven fantasy, which reminds me of some enjoyable stuff I’ve read in the past. If you want comparisons I’d say about 70% Eddings and 30% Gemmel – a sword-swinging romp. The book did seem to terminate rather abruptly, but then it is the first book of a trilogy, which I think is well worth a look for fantasy fans. I just apply my usual rules whilst reading: Am I bored? No. Am I enjoying myself? Yes. Will I buy the next two books? Yes.

Before They Are Hanged

The Last Argument of Kings

Update (From The Man Himself):

The irony is, that eek isn’t in the published book, only in the proof. My editor did indeed strike her line prior to publication…

But many thanks for the review. Be interested to hear what you think of the rest of the trilogy if you do get round to it. I reckon it gets better and better.

But then I would say that, wouldn’t I?