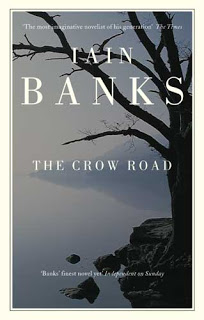 The first Iain Banks book I read, as opposed to Iain M Banks, was The Wasp Factory, which I thought was brilliant and which I must buy myself a copy of and read again. Later reads of his non-SF books I found disappointing so didn’t bother any more. However, when I saw this in a local charity shop, and remembered catching and enjoying some of the TV production, I thought ‘what the hell, I’ll give it a try’.

The Crow Road is an amiable right of passage and light murder mystery which rambles through some interesting insights into life North of the Border, and it is packed with the likable, the tragic and sometimes the annoying. Surprisingly less annoying to me is the utter adherence to the line: ‘Thatcher is from hell and all Tories are evil – socialism and a swing to the left will save us all!’. Ah, ‘uni’ students, don’t you just love ‘em? All this stuff is almost a cultural history, the toxic results of which are presently running our country. I just wonder if the righteous faith of such people – that they are on the side of the angels – has been ‘challenged’ by the last 12 years in Britain.

The protagonist, Prentice McHoan, is a 22 year old history student taking his first steps on the road of life and, as the blurb tells us, ‘he is deeply preoccupied: mainly with death, sex, drink, God and illegal substances’. You want to know what happens to Prentice, but he’s also a character you often feel the need to slap, especially concerning his relationship with his female friend Ashley. But then, who wasn’t so blind at that age? Starting with the sentence ‘It was the day my Grandmother exploded’ this is a book I didn’t want to put down, for despite its ambling pace the whole thing was thoroughly engaging, and despite their foibles I enjoyed the characters and wanted to know where Banks would leave them.

The murder mystery kicked in very slowly and was only one facet of the main concern here, The Crow Road, Death, but I feel it tied in perfectly at the end with that final image of Rory. Some quite beautiful writing here but, of course, no surprise about the politics of the villain of the piece, I’m just surprised he wasn’t shown whipping peasants from horseback. Ah well.