Skip to content
Nice review of The Departure here on David Agranoff’s site.

I was particularly struck by how reasonable these paragraphs are:
The majority of Science Fiction novels with a political message are written by left leanings writers (like John Shirley, John Brunner or Kim Stanley Robinson) or straight-up radicals (like Ursala K.Leguin and Norman Spinrad). I would be lying if I didn’t admit that I like to agree with my favorite novels. However as a political writer myself I don’t want or expect all my readers to agree with me. So in return it is only fair that I read enjoy authors I don’t agree with.
That is the thing, this novel feels very Ayn Rand influenced and seems to call for little or no government. Probably the opposite of John Shirley’s recent anti-libertarian novel “Everything is Broken.” I don’t really agree with a lot of the message but I enjoyed the story throughout. 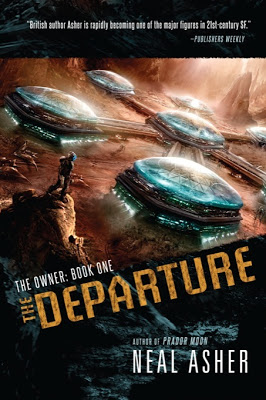 Now why is it that a minority of reviewers are so obviously vitriolic about my stuff because they disagree with me politically? The prevailing meme among them seems to be: his political outlook is wrong wrong wrong, therefore he is a bad writer. Perhaps they can’t stomach the fact that I keep selling books? And why is it, I wonder, that the reverse doesn’t apply? I don’t often see reviewers objecting to a writer’s work because that writer is left-wing. And, frankly, if I objected to novels on the basis of the writer’s politics I would have missed out on a vast number of excellent books. It is sad.
Criticism is prejudice made plausible.
H. L. Mencken