Skip to content
After some quite good TV yesterday, including ‘Stand by Me’ which was a faithful adaptation of the excellent Stephen King novella – an uplifting story completely without the supernatural and whose only horror was the kind we all face or will face – and the Antiques Roadshow, we finally got to what we were really looking forward to.

The First World War from Above presented by Fergal Keane ‘examines recently discovered footage and photographs of the conflict. A 48 minute film of the conflict taken by a French airship in the summer of 1919…’. We saw probably ten minutes of that footage and just a few of the photographs, but they were enough. You didn’t need to see a full 48 minutes of towns turned to rubble, and a Moon-like landscape jagged with trenches like cracks in egg-shell. The program was still excellent and still provided a new perspective on that war, for example, German’s giving away the position of their camouflaged barracks by making flower gardens, and paying the price.
The bit that really captured my attention was one aspect of this war I knew nothing about until I read Sebastian Faulks’ book Birdsong: the tunneling war and the planting of mines. During the battle of Messines 19 mines were detonated underneath the Germans. Each of these (I think) consisted of 450 tons of explosive and not only changed the course of the war but the shape of the land. Later pictures showed neat round lakes in the Belgian countryside, surrounded by nice little copses of trees – lakes that are basically graves (like so much of that countryside) but where the only human remains to be found are pieces of bone no bigger than a fingernail. 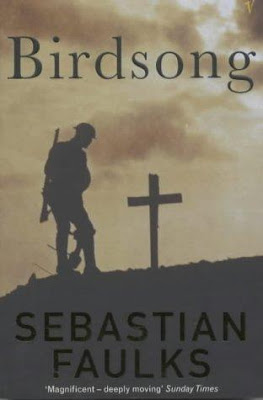 And on a side note: I now have a better understanding of the destructive power of explosions measured in kilotonnes (since ton and tonne are roughly equivalent). These were about half a kilotonne.

In total 21 mines were laid but two of them were not used, and the British then lost their location. One of them was detonated in 1955 by a lightning strike on a nearby pylon, but wrecking the surrounding area but killing only one cow, whilst the other still hasn’t been found. 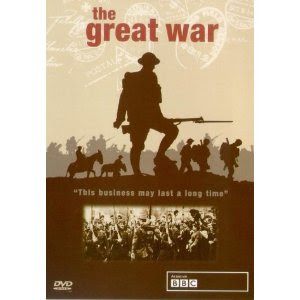 As well as the aerial footage, some of the usual black-and-white film was shown in this: the guns firing, the men going over the top and a particular clip of a soldier carrying his wounded comrade out of a trench. All of these were immediately familiar since, before we came back to Britain, our TV viewing over a few days consisted entirely of The Great War. This series was first broadcast in 1964, narrated by Michael Redgrave, and is still well worth watching. Really, if you haven’t seen it, I suggest you do.

Update: I stand corrected. It was a total of 450 tons of explosives distributed to make 19 (or quite possible 21) mines under the German lines. This means they weight in at between 20 and 25 tons each and, as I noted in comments, was enough to shake the teacups in Downing Street. Then again, all of them went off within seconds of each other. Anyway, this brings me to the conclusion that a half kilotonne explosion would be enough to excavate Hanningfield reservoir, not the village duck pond.