Skip to content
Well, we went to see the first film of The Hobbit yesterday. I was a bit worried about it being a bit of an over-extended franchise but I shouldn’t have been. Converting a single book into a single film can be a bit dodgy because there’s always more in a book than in a film, and some of the best films have been made from short stories. I also shouldn’t have been concerned because it was Peter Jackson doing this. Some may have complained about the extended ending to the last Lord of the Rings film but Jackson was only being as faithful to the books as he had been all along. 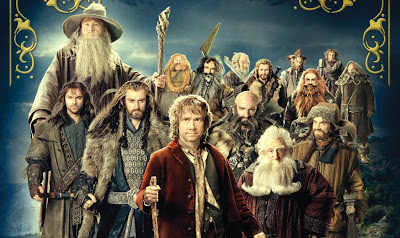 I sat there for the best part of three hours utterly riveted. It was visually gorgeous, great fun, I enjoyed it immensely and, of course, Martin Freeman was excellent. Perhaps I enjoyed it so much because Tolkien played a large part in my formative years. In junior school I remember a teacher reading The Hobbit to us and the first book I picked up on my first visit to a library was The Two Towers, and after that I read LOTR maybe five or six times. Is it only readers of that stuff that get slightly choked up when elves first put in an appearance or when Galadriel pays a visit? Probably, but Caroline, who has read none of these books, very much enjoyed the film too. Highly recommended.