Skip to content
It’s interesting returning to the kind of stuff I used to read rather more years ago than I care to think about. Some writers are now just an immediate ‘no’ because too much in their books has dated. Social mores and technology have changed so much since these books were written that some of them are risible. Also, since having written a fair few books (I dunno, 25?) I see stuff now I wouldn’t have seen when I was a naïve teenager. I see the holes, the ideas started and abandoned during the book, the diversions, the padding or rather lack of an editorial hatchet.
Thus far those that had stood ‘my’ test of time have been books by A E Van Vogt and now to him I add Jack Vance. 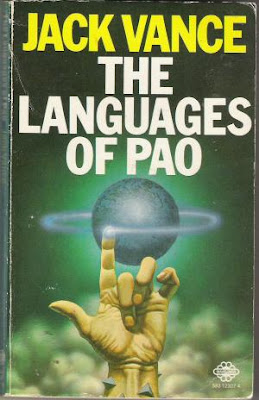 The Languages of Pao by Jack Vance has a damned good idea as its basis: changing a culture by changing the languages the people speak. In fact, having learned a lot of Greek, I can see how strongly a language reflects its culture and how a reversal, as in this book, might be true. I enjoyed this, the characters, the strange cultures described, and the conclusion. It is notable how both Vance and Vogt are very vague about the technologies their characters deploy – here we do have tech that is indistinguishable from magic – and describe settings that are only loosely based on the writers’ own time. In this way it is much less likely for their books to go past their use-by date.