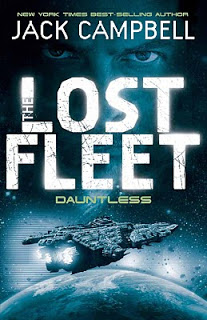 There’s a whiff of antiquity about this book that reminds me of E.E. Doc Smith and other books I read at about the same time I read the Skylark series. This feels like WWII but with space ships and could easily have been written in the 50s. I felt momentary cringes at the name of the character ‘Black Jack Geary’ at the use of ‘hell lances’ and ‘grape shot’ and at crewmen being called ‘sailors’. The technology felt daft, as if the electronics aboard the ships might have employed thermionic valves, as if the corridors were full of steam pipes and the gunners were hand-loading shells. I half expected someone to pull out a slide rule at some point to calculate vectors.

Why shouldn’t a beam weapon be called a ‘hell-lance’ and why shouldn’t ‘grape shot’ fired at relativistic speeds be perfectly acceptable? How different is the former to a maser or particle beam, and how different is the latter to rail-gun missiles? And why shouldn’t the kind of command structures seen in our navies be used? Such arguments I tried on myself as I devoured this book. What retired naval officer John G Hemry (his real name) has done here is combine his experience of military service with an obvious (and probably dated) love of science fiction.

To sum up: all of the above is true, but in reviewing a book I have to ask some very simple questions. Did I care about the characters? Did I want to know what happened next? Did I enjoy reading this book? Was it a good read? Will I buy the next book in the series?

The answer to all these questions is ‘yes’, and this book must be included in that long list called ‘guilty pleasures’.