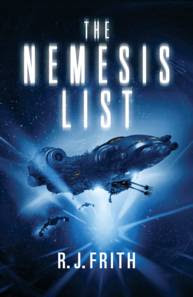 I wasn’t going to write a criticism of this book because I do have some negative things to say and, really, I don’t like doing that. I much prefer to give a good review of something I enjoy and ignore what I haven’t enjoyed (and probably haven’t finished). However, on balance, I’ve come to the conclusion that the good outweighs what I see as the bad in some of the biggest and most fundamental ways. Why have I come to this conclusion and why have I changed my mind?

Just recently I delved into a large tome produced by someone who is supposed to be a big shot in the fantasy genre and after about twenty or thirty pages started to lose the will to live. It was utterly boring. It was swords and sorcery transforming into soap opera. Next I picked up a big fat science fiction tome and the effect was precisely the same though took a shorter time to take effect. Both these books are published, both by supposedly proven writers. R J Frith the winner of the War of the Words competition hosted by Tor UK and Sci Fi Now magazine gives us The Nemesis List, and it is worth your attention.

My particular gripe is that Jeven Jones, the main protagonist of this who is a ‘fast-tracked evolutionary leap into the future’ comes across as pretty ineffectual and damaged considering that there seem to be vast dark forces trying to track him down. Throughout the book there was the promise of something extraordinary from him but it didn’t seem to arrive. I wanted to give him a slap and tell him to sort himself out, which I guess shows how well he comes across as a character. I could also see that the Jeven Jones character was quite similar to the girl with psychic powers in Firefly. But you really have to remember that all this is my subjective response.

Now to why I think it’s good: I read it from cover to cover without any feeling that I was losing interest or wanted to put it down. I enjoyed this book and, frankly, if there’s a follow-up I want to read it. It was dark, quite assured, and Frith can get you to emotionally invest. I am, even now, considering reading it again to see if I can get a better handle on it, and that doesn’t happen often with me.

Do I recommend it? It’s flawed but promising and yes, I do, because whilst some of you out there will hate it, I rather suspect that there will be others who will think it is the best thing they’ve read in a while.