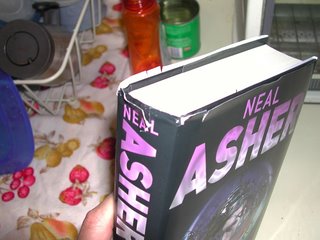 Sigh, I sometimes wonder whether sending people signed copies of my books is worth the hassle. Some of you reading this may recollect my rant about the Canadian post office, with its stringent bureaucratic bullshit about how parcels should be addressed. They lost one parcel and returned another parcel to me (I did not put a senders address on the front, so some twat looked inside the parcel to find said address so as to return the parcel). But this was not the end of the matter. Sticking utterly to the letter of Canadian post office law I sent books in two parcels, because in one parcel they were nearing the weight limit and I didn’t want mistakes. These parcels were also correctly addressed and signed-for delivery.

The recipient of these parcels wasn’t in the office when they got there so one of the two parcels went to the local post office. He had to pay $8.00 in duties for for the privilege of collecting it. The second parcel, one that wasn’t even searched by Canada Customs, was decreed to be of a value in excess of $870.00 CDN. As the recipient said to me “WTF!!!! Are they on crack???” They tried to charge him almost $60.00 in duties on books whose value came $37.00 on the custom’s declaration form. “They’ve got to be on drugs!!!! And not even the good ones!!!!”
He observed:
“Neal, please don’t get me wrong because I’d never devalue your work because yes, I’m definitely a fan and I REALLY can’t wait to get those books in my hands… But, there’s no fricken’ way in hell I’m going to pay twice the amount of the declared value in duties so that some petty, self-important bureaucrat can pad his personal bonus for revenue generated!”
He disputed the duty charges and sent the package back to Canada Customs to be re-evaluated. Customs we’re then supposed to contact him so that they could have an “informed discussion” about the value of the contents.
“F*ck (again!!!)”
The final result of this was an apology from Canadian Customs. Apparently a computer glitch resulted in the books being overvalued by a factor of 10. How remiss of them. 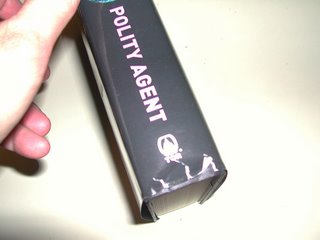 My latest bit of fun, which prompted this bit of blogging, concerned a copy of Polity Agent sent to a guy in the USA. Despite being bubble-wrapped and placed inside a padded envelope, the book arrived with its spine damaged and dust jacket split top and bottom (see the pictures). I now must make a compensation claim (I won’t be paid the full value) and send another book from a limited supply. Be nice if the postal workers concerned treated parcels with a little respect rather than using them to practise drop goals.

Anyway, it is now an unfortunate necessity for me to send books wrapped in bubble-wrap inside corrugated cardboard boxes, which I’ll have to buy, so costs just went up.