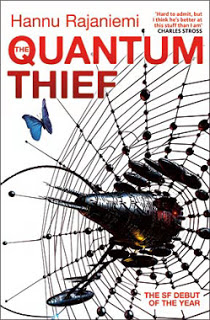 In a way this was more like a fast tour of the post singularity world rather than a story set in it. I’ve been reading science and science fiction for a very long time, but I often felt the need to hold up a finger and say, ‘Hang on Hannu, if you could explain –’ … but no, he’s gone like a tour guide on speed. The ideas hit you like cars in a motorway pile-up giving you no time to deal with them, absorb them. And, of course, while the ideas are hitting you like that you’re not properly processing the plot and can fail to engage with it. My feeling is that before he leapt through the next q-dot membrane to begin his next adventure in some gaming virtuality he needed an editor to catch hold of his collar and force him to stop and smell the roses, even if those roses were laced with an optogenetic virus.

Now for the however… This was all very enjoyable, bubbling with fascinating technology and its resultant life-styles, and a book that really does feel like a glimpse into a post Vingean singularity world. I found myself caught up in the author’s enthusiasm with it all and by the end of it wondered if someone has slipped amphetamines into the printer’s ink. For me it is a book I would like to read again, but with the Internet running so I can track down and nail all that glorious weirdness. And in the end, just like with the previous book I reviewed here, the answers to the questions are mostly ‘yes’.