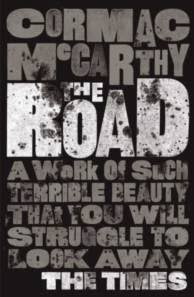 In the past, like many readers of genre fiction, I have been overcome with guilt about my addiction and a mistaken urge to self-improvement. I’ve fought narcolepsy through the first hundred or so pages of War and Peace, I enjoyed my journey East of Eden, been mildly irritated by To Kill a Mockingbird and been surprised at my enjoyment of The Life of Pi and the The Story of the Dog in the Night-time. Throughout an adult education English A Level I was first repelled by Congreve, Othello and The French Lieutenant’s Woman, then told the requisit exam-passing lies about how I enjoyed Richard II and The Bell by Iris Murdock. So when Julie Crisp at Macmillan suggested I read The Road by Pulitzer-winning doyen of the literati Cormac McCarthy, I did have some reservations.

Upon discovering that the present state of my back prevents me from doing light labour, and that sitting at a computer for too long results in me being unable to lie flat when I go to bed, I picked up The Road and decided to give it a try. I expected to struggle through twenty or so pages of pretentious twaddle then, depending on the strength of my reaction to that, either give the book to one of the free lending libraries down in the bars in Makrigialos, or usefully employ it in our stove here.

There was some to criticise here. The bare bones writing thing was taken too far with the dropping of apostrophes, which grated, and the lack of speech marks, which sometimes led to confusion. However, the only pretension I found was in the praise the reviewers heaped on The Road. Superlatives abounded in the descriptions of this shattering, searing, utterly compelling, haunting, gripping, brutal, heart-rending story. One twit linked it to global warming and nearly stopped me at the cover, but luckily I ignored that and read on. The Road is about the aftermath where the ‘math’ isn’t really important. If you wanted to be picky this seems to be set in that other possibility-hyped-to-catastrophe the nuclear winter. The reviewer concerned was just going with the ‘right-on’ lazy groupthink, as so many of them do.

So what is this book about? It is about a man and a boy struggling to survive in a burnt and lifeless world as they take the road south, where the man thinks it will be warmer, or rather, it’s about carrying on without hope. It’s the black, white and grey of the cover, stark, dismal, bleak. I read it in about 4 hours and never regretted a second. I even forgot about my back-ache. Recommended.