Okay, more now from your correspondent in Crete. We are still occasionally getting clouds in the sky here, but 19 is the lowest the temperature has dropped in the last couple of weeks, and that in the middle of the night. Oddly, up here in the mountains the temperature has often been higher than down in Makrigialos, which is a first for us. Only yesterday we went to Sitia for shopping, came back pouring with sweat to then provide drinks for the workers who were likewise boiling. After they went, at about 3.00, we decided to go to Makrigialos for a swim, since the temperature up here was 30 in the shade. We didn’t swim, we sat in a bar shivering 23 degrees centigrade. Crazy.

With the change in the weather (and the lack of wind) the plants are really taking off. Here’s a picture of our datura tree grown from a cutting about eight inches high last year. 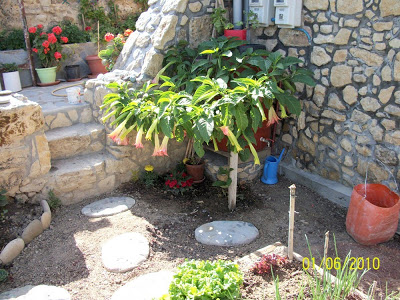 The aforementioned lack of wind has also enabled us to spend more time outside (though of course it is impossible to use a laptop there). Here then is a picture of a writer hard at work on our front terrace… 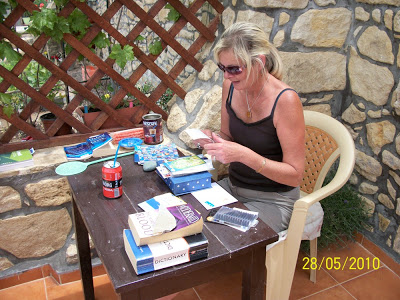 The ruin proceeds apace. Here’s a picture of the garden walls that have gone in, and a distant shot of ruin and house. Some stuff you can’t see, like the plastic tank that’s been buried beside the building, and the connecting pipework. Next is the ‘apothiche’ (garden shed), all the internal pipework, all the internal electrics, the concrete floor, the concrete path covered with ‘karistoo’ (lovely shiny stone from one particular Greek island), digging the ‘vothros’ (cess pit), the internal rendering and new walls, the windows and doors and then, of course, little essentials of life like a toilet, shower, sink … oh, and tiles. 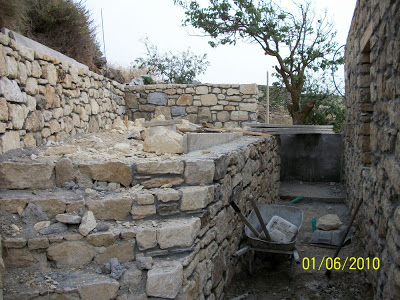 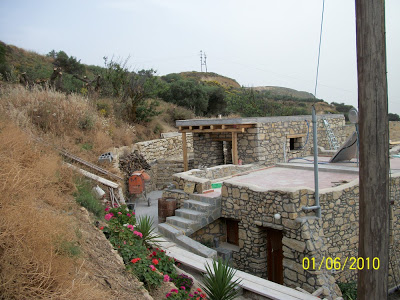 Damn but I need to work harder!