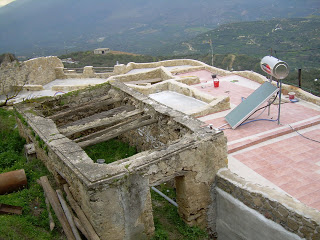 Just a little to report this time round. My back is a lot better, possibly after stretching it a bit in the sea; I’ve sunk a water barrel in the front garden to take water from the shower and sinks which we now transport by bucket for irrigation; we’ve eaten our first radishes, lettuce, rocket and oriental red mustard; we are no longer using the stove – the temperature generally holding at about 22 in the house all night and outside during the day rising to above 25 – and things are gradually getting tidier. The main thing on my mind at the moment is the ruin around the back of our house (picture from 2 or more years ago).

We went to a ‘bring and buy’ sale at someone’s house in Makrigialos and a lady there mentioned she had a fairly new window for sale. I asked about the size and she told me it was 0.8 by1.0 metres, which to my recollection was about the size of one of the window gaps in our ruin. Enquiring further I found out it was a box frame with two opening windows and two shutters – precisely the same design as the ones in our house. At a price of 10 Euros I couldn’t really go wrong, so I said we’d have it. We collected it and it is fine – a perfect fit.

This then got me to thinking that I should talk to Mikalis, a Greek guy who did some excellent work on our house last year, about rebuilding the ruin. During the week, after our Internet session on Wednesday, we came back to the house to find a litre and a half bottle of raki on the doorstep. I thought Mikalis might have left it so gave him a call. It turned out that he didn’t leave the raki (just the carrier bag full of lemons the week before), but I did take the opportunity to ask him to come and measure up and give me some prices.

Mikalis visited during the day to check things out, then he and his wife came in the evening with raki, olives and artichokes (aginara, eaten raw with lots of lemon juice and salt). Not to outdone on the gift front he left us the raki we hadn’t drunk, which was about three quarters of a gallon of the stuff. Subsequently, this Sunday, he came for a further measure up of the ruin and discussion of the work.

The height of the windows and door needs to be raised, another window needs to be put in, the walls need to be pointed on the outside and raised to support a new roof. This is all before we even think about electrics, plumbing and everything else inside. For example, if we wanted to connect up a shower and toilet to the waste water and cess pit of the present house, that would require boring through metres of stone and concrete and probably wrecking the bathroom we already have. Better to install a tank beside the ruin and from that pump everything to a soak-away pit in the back garden since the plumbing there will only be used for a few weeks of the year.

I anxiously await those prices, which always scare the living daylights out of me.