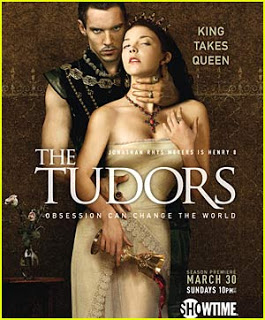 We’ve been watching the BBC2 series The Tudors, and thoroughly enjoying it. I have also been considering how much things have changed in the last 500 years, and how very much they’ve remained the same.

Treaties were made and broken faster than Kyoto resolutions and generally they were just an excuse for the upper echelons to go on an extended jolly. Rising members of Court were sent to Europe for negotiations which of course involved lots of big feasts, hunting trips, gifts and the purchase of essentials like jewels and silks and such. Alliances forged throughout all this led to numerous unnecessary wars whose justification most found difficult to fathom. If anyone wanted to rise in Court he had to loudly declare his adherence to current accepted belief, before finding out who to bribe. Corruption, plotting and nepotism were not where they system went wrong, they were the system.

I guess they lived a little more frenetically than we do. You would, wouldn’t you, seeing people dying all around you from unknown causes, and knowing that you’ll be lucky if your own span extends beyond the age of forty, and that’s before taking into account what might happen to you if you step on the wrong toes. Nowadays we at least stand less of a chance of being barbecued for our beliefs, that now being the territory of foreign fanatics rather than the state. And a small lesson to learn from this, and other historical dramas, is that those who rule have always stolen from the ruled, and probably always will. There has never been a time when things were better, and the corruption we see today has a long historical tradition.

Depressing thought, but a good series.