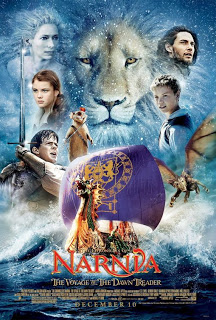 You can probably guess the impression the book of this made upon me when you consider the name of Ambel’s ship in The Skinner. I called it the Treader, because that seemed like a good name for a somewhat weird ship undergoing a weird journey and, remember, Ambel’s ship even had a talking animal aboard…

However, if we are to judge by the way the last two books have been portrayed in film, I was missing the somewhat unsubtle message and the indoctrination bounced off my thick skin. When I read the books as a youngster I enjoyed the magic, swords, talking animals and not for one second did I think that I had ‘nothing without belief’ or that I had to ‘have faith’, nor did I notice that in our reality Aslan went under a different name. Even then I was realizing that suspension of disbelief was what I wanted, between the covers of a book.

The film was visually gorgeous and I would have enjoyed it immensely but for those two comments above dropped in like a roast pig in a mosque. From the first of them it lost me and I was sitting there with a bit of a sneer on my face, which became more pronounced at the end with all that Aslan’s kingdom nonsense.

Where the books so unsubtle? I don’t remember, maybe because as a youngster, having been brought up in an agnostic then firmly atheist household, I was making no connections at all. If they were then I find it surprising that my mother, a school teacher, used to read them to the kids at her school. One would suppose that they were, since in his other works C. S. Lewis was loudly banging his tambourine and arguing for belief, for faith. Or is it the case that those making these films too firmly bought into the idea of the Narnia books as a Christian allegory?

Where the books this loaded with doctrinal cudgels? Or were the products of this member of the Inklings not quite so consciously didactic? I don’t remember being quite so annoyed by the first film, The Lion, the Witch & the Wardrobe. Different directors, producers?