So, Caroline’s parents came here for eighteen days and, a day or so before they arrived, the wind started blowing. Crete is famous for its winds – there’s a book with the title The Winds of Crete (one of many I read about three years ago). The wind did not really let up for most of the time they were here so we got sand blasted on the beach, the sea was chilled (a little) and swimming any distance a pain because of the spray in my face. Up here the bead curtains rattled continuously, the shutters banged and chairs perambulated around the terrace. We jokingly told Gerry and Myrtle, when they were going, to take the wind with them. They did, because it stopped the very next day.

As we drove back from Iraklion airport the wind had turned very hot, along the south coast road it was cooler to drive with the windows closed (without air conditioning) since on occasion what came down off the mountains and through the window felt like the draught from a furnace. The next day it was completely still in Papagianades with the temperature rapidly climbing into the thirties. Driving down to Makrigialos was odd, because we drove into cloud and then out of it into a muggy southern breeze, and the sea down there was rough, but warm. Today (Monday 26th) as I write this, it is still again, the noise of the wind replaced by the racket of cicadas and the temperature climbing.

It is annoying that I’ve chosen this very time to set my nose back to the grindstone, but I’m a man of my word and I will do 2,000 words today despite the temptation to abandon this computer and sit out on the terrace sipping frappes. This blog, now, is essentially a warm-up (take note of that all you would-be writers).

Okay, some more pictures for you. The first here is of a plant purchased with money given by Myrtle and Gerry so we could get something for our tenth wedding anniversary (anyone got a name for this?). It grows somewhat like a banana so I put in this large pot until it has thrown up some more rolls of leaves whereupon I hope to divide it then transfer it to the two pots you see sitting each side of the ruin doorway (also bought with that money). 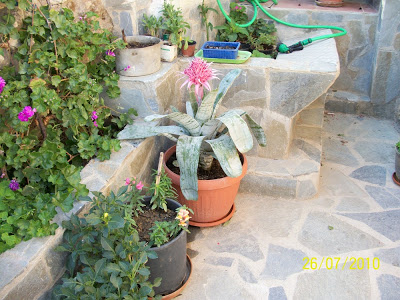 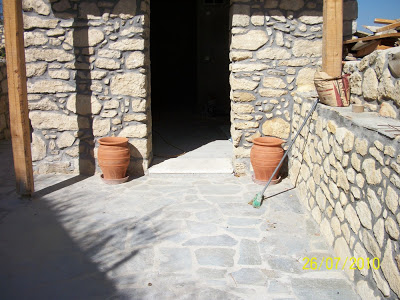 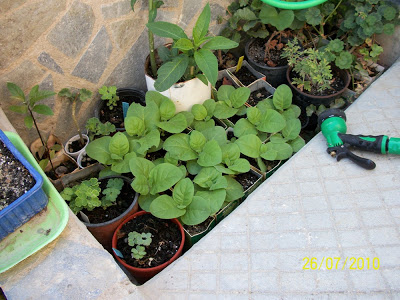 The other plants, presently growing in out outside sink, are a gift from a British couple here (thanks Martin and Vicky). I’d been supplying various people, including them, with spare plants I’d grown and Martin came back with the offer of these tobacco plants. I first assumed he meant tobacco flowers, but no, these are the real deal. I was a little bit wary until discovering that it is not actually illegal to grow tobacco, not anywhere, not even Britain (I think). I guess the assumption of illegality stems from (excuse the pun) those other plants that often end up inside a rollie paper. All I need now is some way of finely shredding these…

Update
Well, it seems Gerry and Myrtle took only the North wind with them. On the second day it was perfectly still in Papagianades, but as we drove down to Makrigialos, we encountered an oddity in July: a great mass of cloud halfway down. At the beach we found rough seas blown in by a South wind, which was obviously encountering an air temperature difference higher up to cause those clouds. Then, on the following day, rough seas still and part of the beach has gone missing. 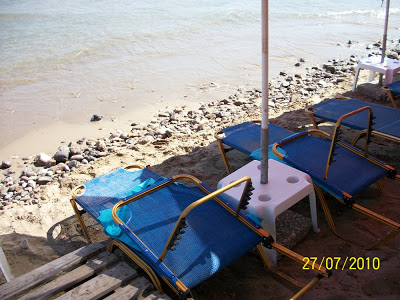