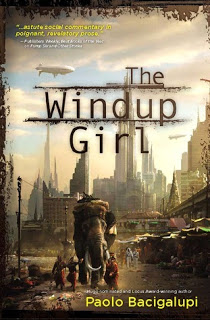 My opinion about this book is difficult to nail down. It was rich and textured and engaged all the senses, the characters were fascinating, too, and the extrapolation and some of the ideas were excellent. I particularly liked the kink-spring technology and the semi-retro tech based on it, like the disc guns that are a reminder of a childhood toy. I enjoyed the genetic manipulation and the wind-up girl herself, though of course there were shades of Blade Runner there. However, what gave me pause was the heavy reliance on scares generated by the ‘green’ movement and the MSM, but of course, in present day establishment thinking, it is right on.

We have the scares about global warming and sea-level rise here, and you all know my opinion on them. Yes, we do have global warming, and we’ve had it since the Little Ice Age and it hasn’t come close to being as high as in the Medieval Warm Period and has flat-lined for over a decade. As for sea-level rise, putting aside Al Gore idiocy and desperate IPCC spin, the last time I looked it was few millimetres a year (as it has been for 8000 years), and if we can’t cope with a metre rise in sea-level in three or four centuries then we might just as well give up right now (it has also been dropping for the last three years). However, the clue is in the label. This is science fiction so writing about a future globally-warmed and flooded world is valid, though, extrapolating from historical climate cycles, and writing about a new Ice Age, would be more so.

Then we have the scare about genetic modification or, more specifically, the fear of GM under the control of the evil corporations (sigh). Here we seem to be going into Daily Mail ‘Frankenfoods’ territory, combined with the ‘capitalism is evil’ shibboleth of the left. I am a little doubtful about the idea that our scientists are going to abruptly pull masses of world-devastating monsters out of their arses that billions of years of competitive evolution has failed to manage. But whatever, again this is valid for science fiction, and is of course a very useful spanner in the SF toolbox. I also get tired of that constant portrayal in fiction and film of the evil corporation. It strikes me that corporations seem to come up with most of what improves our lives, while it’s the governments that enjoy bombing people back into the Stone Age.

(I also have to wonder … where are the windmills and tide-generators supplying if not electricity then joules for those kink-springs? Where, with such advanced biotech, are the tank-grown hydrocarbons and the CO2 absorbing microbes? Where, also, are the nuclear power stations? Maybe in the rest of the world?)

Thereafter, if the scares were true, the extrapolation in the book is on the button. I do see Luddite environmental police (white shirts much like Hitler’s brown or black shirts) destroying illegal and dangerous technology and pillorying those who are profligate in energy use. I do see an economy based on calories, and the kind of life-styles depicted in this book. And I do see human life being cheapened.

Now I have to add something more. I have, over time, started to make it a rule that I won’t review books I either don’t like or don’t finish. That I finished this book, considering my personal opinions, is testament to how much I enjoyed it. It’s a valid look at a future from one point of view and, unlike what I have seen in other SF books that venture into this sort of territory, the characters are people struggling to get on with their lives in difficult circumstances, and are not vessels created just to deliver righteous homilies.

Cue the visits by trolls to enlighten me in the ways of correct political thought.