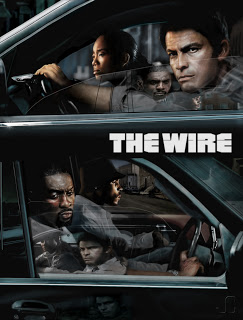 Oh dear, what a disappointment. We’ve watched about four episodes of The Wire so far and, since seasons 2, 3, 4 & 5 of The Shield are on their way to us, I doubt we’ll be watching any more. The first episode was a chaotic mess but we stuck with it in the hope of improvement and did begin to get a handle on what was going on, but that chaos was but a minor problem amidst many larger ones.

Let’s start with the language of this, which is a big downside for the English viewer. Not only is American English sometimes difficult (how often have I given up on the mumblings of Brad Pitt) but the gang and police slang in this is nigh incomprehensible. It took me three episodes to realize they were saying ‘terraces’ and not ‘terrorists’, and generally I understood about half of what was said.

The next problem is that if I’d wanted to watch a show that was 80% office politics I wouldn’t have bought a cop show. Frankly it is fucking boring. The paper shuffling and dick waving contests of bureaucrats is not something I find entertaining. It’s depressing.

Then there are the characters. Okay, if there was just one person here who I was pulling for, that might have made a difference. However, they are all wounded, damaged screw-ups, all detestable twats, and if someone were to napalm the lot of them I’d shrug and actually consider watching the next episode. I’m guessing this is all supposed to be realistic depiction of life on the street, man, right-on with the social ‘issues’ etc. If I want realism I watch a documentary.

In The Shield I had identified and had some empathy for every major character within the first episode, which was an entertaining story in itself. Four episodes of The Wire have left me annoyed at having taken any notice of the hype, wishing I could get my money back, and considering whether to bother handing it in to a charity shop or binning it. Life is too short for shit, really.