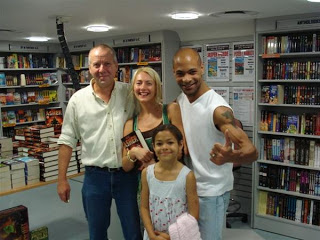 I’ve been a bit wary of including some people in my ‘friends’ list on myspace. There seem to be many bands on myspace and, really, I’m not going to include people just to up the number of my friends in this weird cyberspace popularity contest. To get included on my list a person needs to at least show some interest in SFF, writing or even better, have my name down in his or her books section. When this guy contacted me I thought, especially upon seeing a complete lack of a book section on his page, ah, another band-on-the-make, but he soon disabused me of that notion by directing me to his ‘Influences’. Miguel Vella TheGreyArea. He, his daughter and his wife Wendy then turned up at my Forbidden Planet signing where they got one of the staff to take this picture (I’m the ugly one on the left … and see that big stack of books to the left of me?). Both of them are fans, and on this occasion he sprang this as a surprise on her, since she didn’t even know why he’d taken her into the store. Cheers guys – nice to see you!