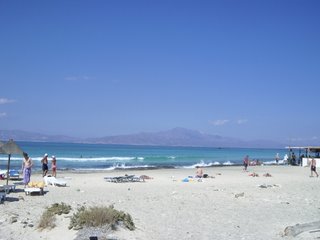 There’s not much to say about a holiday when you spent most of the time lying in the sun, or drinking Retsina or Metaxa, or eating. But I really have to say something about the eating.

On our first night at the Athina Apartments we wandered down to the seafront of Anissaras – where a few restaurants were located – walked past a couple that looked okay but with décor a bit motorway services – then came to a place that seemed rather nice. It was called The Windmill and was a ‘traditional Greek taverna’. Stretching up from the road along the seafront a grassed area, scattered with tables and a couple of water-pump windmills, led to the restaurant itself. We wandered up to take a table then scanned the menu.

The both of us being seafood addicts – specifically prawns and other shellfish – we ordered the ‘shrimps’ which came three ways: boiled, fried or grilled. I chose fried and Caroline chose boiled. The dishes were about 10 euros each, along with a litre of Retsina at 7 euros. When these ‘shrimps’ arrived we knew we’d found a place we would be returning to. 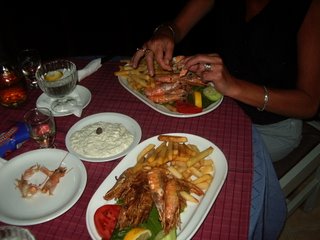 To your average Briton, a shrimp is something not much larger than a cigarette butt. We’d seen the pictures in the menu so knew this dish would be otherwise, but weren’t entirely sure what we’d get. Now to us prawns are the size of a finger. These were king prawns – check out the picture – and you just don’t get them like that in Britain. They were fresh firm and meaty and the fried version you didn’t even have to peel. I ate just about everything but the shell around the head. The shell was like a seafood version of crackling. I’d ordered them fried because I’d remembered eating something similar in Rhodes longer ago than I care to think about.

Other food in this family-run restaurant was of similar quality, but for us the ‘shrimps’ were best. I recollect a German couple on the table next to us eating the mixed grill and finishing their meal just before ours arrived (this was on another evening, since we devastated the Crete shrimp population in that restaurant). When the guy saw what we were getting his eyes nearly popped out of his head and he had to ask me about them. 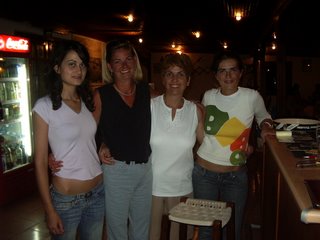 We ate in this restaurant for just about every evening of our holiday. We drank Retsina in their garden after each exhausting day on the beach and watched the owner’s nutty goat trying to climb on sunbeds. Why try somewhere different when you’re getting food, and service, this good? The family running the place were friendly and very good at what they did – picture here of them with Caroline. I’d recommend The Windmill to anyone holidaying in this part of Crete.